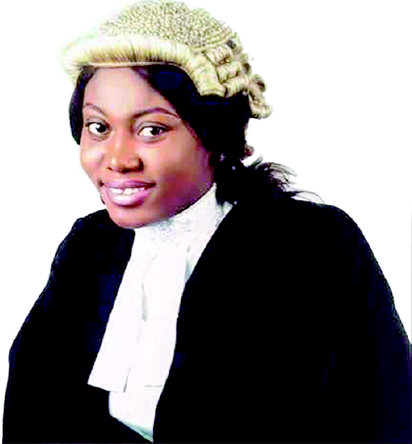 Naomi Ekop 21,  has again debunked the general aspersion  cast on undergraduates of privates institutions  that they are not a match to their counterparts in  the public universities.
Ekop, who graduated with  a first class  at the Afe Babalola University, Ado Ekiti, repeated the same feat at the  Law School, as she emerged the overall best graduating law student of 2018 set.She was adjudged best in Civil Litigation, overall best female lawyer and overall best student at the Law School.
By this exceptional academic performance outside the shores of  her school, she didn’t only confirms the worth of  some private universities in Nigeria, it also asserted that many  graduates from private universities are academically more sound than their counterparts in even federal  owned universities.
Besides, it will not be out of place to state that her quality performance at the law school has further vindicated first class graduates in private universities.
It is a popular statement among  some graduates and lectures in public universities that first  class  in private university is like sachet of pure water which any person could purchased.
You will therefore agree that for Ekop to had graduated with a first at ABUAD and repeated the same  at the Law School as overall best shows, she really worked for it and her school and lecturers are good.
What is happening to our public universities today, why are first class graduates scarce among them? Is  it the problem  of the students or problem of the professors who are stingy to award mark even when the  students merit it. Or are they afraid their students might not be able to defend it at the labour market.
Well,  Ekop has been able to defend her first class grade among other law graduates from all public and private  universities in Nigeria that competed at the law school.Ekop who had just above 200 in her  UTME in 2012 to gain admission same year at ABUAD eventually topped others in her school and Law School who had close to 300 in JAMB. She further proved a point that your JAMB score does not determine your performance in the university.
Ekop who hail from Akwa Ibom State said she was admitted into ABUAD in 2012 and graduated in 2017,
Speaking with Vanguard after the founder and Pro-Chancellor of ABUAD, Chief Aare Afe Babalola gave her N500, 000 for performance, she said: ” it’s just God’s grace and then hardwork.”
She said though people say it’s really tough in the  Law School,  adding that if only students knew themselves and developed a strategy,  by the time they get to Law school, it would be easy to make excellence.”Plan your reading time, know what works for you and then work with your curriculum,” she advised.

According to her,  by the time you start reading consistently from the first day in  school, when it’s time for examinations you wouldn’t be scared, adding, ” You would be able to face the examinations and come out well.”

She said: “I got the best in Civil Litigation, was third best in Criminal Litigation,  overall best female student and also the overall best student at the Law School.
“At ABUAD, I was on a first class from 100L to 500L, so I had to consistently maintain that because there is no other way. Once you start, you just have to keep maintaining that till your final levels for you to  graduate with a first class.”So I just had to plan that each year, each exams, I just have to be better, I had to do more than the previous one, just to sustain the level.”Asked her future plans,  she said: “Currently,  I am serving as a corps  member in Bayelsa state, after which I hope to further my studies and then probably join the academics.”