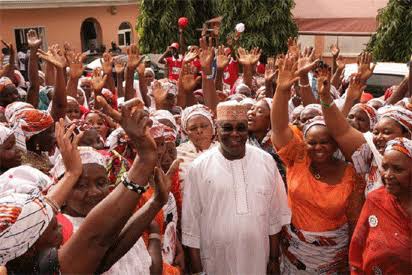 According to Punch, the groups, at a meeting in Sheraton Hotel, Abuja, said that Atiku has the capacity to lead Nigeria.

Vanguard reports that the representative of the NEF, Ango Abdullahi, while speaking to newsmen, said that the country requires a new leader.

Abdullahi said “The reality is that we have to fish for a president among the two major parties, the ruling and the main opposition.

“It is clear that the country requires a new leadership and this is why the Northern elders Forum which I lead is in agreement that a new leader should emerge and that leader is Atiku Abubakar.”

“It is unfair to accuse us of vested interested on issues that ought to be of concern to every Nigerian irrespective of tribe and religion. Nothing is farther from the truth that some of us are being frustrated because we have been denied of contracts or appointments.

“We are yet to receive a reply to a letter challenging the government to name any of our colleagues who have asked for contracts.

Explaining the rationale behind the choice of Atiku, PANDEF’s leader, Chief Edwin Clark accused President Buhari of violating the constitution by suspending the Chief Justice of Nigeria (CJN), Walter Onnoghen.

“We have served in governments, so nobody should make the mistake of saying we are looking for jobs. We don’t belong to a political party but we met as elders and leaders of the three regions of the country because the country is at a crossroad.

“We want a leader not sick, but focused and has the respect of foreign leaders. We have been passing through crisis and the outside world is laughing at us. One man cannot change the constitution of Nigeria, the moment you can remove the chief justice of Nigeria (CJN) by fiat and gets the power to remove the senate president, you become a dictator,” Clark added.

John Nwodo, the President of Ohanaeze Ndigbo said “Today’s Nigeria is not the one we used to know. The Nigeria we have today is not the Nigeria we desire. I grew up in a Nigeria where we use to love each other. Today, we have a head of state who has reminded us of our ethnic and religious differences and has put us into jeopardy.

“We have seen Katsina, Zamfara, Sokoto, Borno states crying that they have been overwhelmed by insecurity, seeking military intervention.

“This is the edge of precipice. These proclamations of governors followed the declaration by former chief of army staff, asking Nigerians to take up arms and defend themselves following the unrest in the middle belt.

“The very essence of government is to secure the country. The security of the country is in jeopardy. We have a constitutional deadlock in the country. Southern and middle belt have insisted on restructuring, APC committee recommended interesting initiatives but nothing from the president except to say we don’t have a problem of structure but process.”

Also, the News Agency of Nigeria (NAN) reports that the Association of South-East Town Unions (ASETU) has endorsed the Atiku Abubakar and his running mate, Peter Obi as its sole candidate.