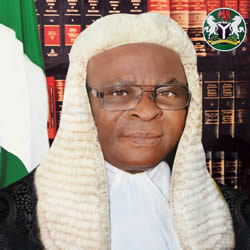 The Senate, Monday has withdrawn the case it filed at the Supreme Court against the suspension of the Chief Justice of Nigeria, Hon. Justice Walter Onnoghen.

The Special Adviser to the President of the Senate on Media and Publicity,Mr Yusuph Olaniyonu in Abuja said the discontinuation of the case followed the intervention of the National Judicial Council (NJC) on the matter. He, however said that the case was slated for hearing at the apex court tomorrow.

He explained that the was to affirms the confidence of the Senate in the ability of the NJC to successfully and creditably resolve the matter.

You recall Onnoghen was suspended by President Muhammadu Buhari on Jan. 25 on the order of the Code of Conduct Tribunal (CCT) where the CJN is facing trial for alleged false asset declaration.

The action which sparked criticisms from many Nigerians, including the President of the Senate, Bukola Saraki, who dismissed the suspension as unconstitutional.

Four days later, Saraki said the Senate had filed a case at the apex court to challenge the president’s action, a move disowned by the APC caucus.

Rising from an emergency meeting on the matter on Tuesday, the NJC gave Onnoghen and Muhammad seven working days to respond to petitions written against them.