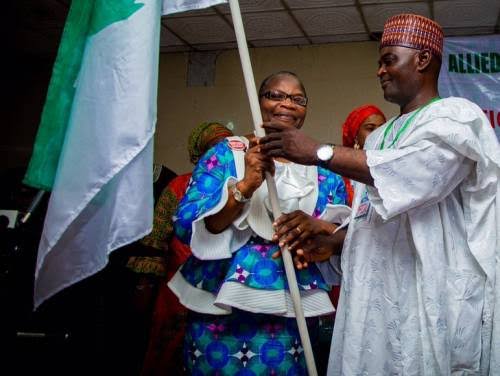 According to him nobody should attaché any emotional or sentiment to it, adding that it ethical and lawful to account for fund given to you.

He said: “” No one should be emotional or sentimental about this. it is the right of the party that must submit report on campaign fund and expenditures to have all the information in the spirit of transparency and accountability in line with (s.92(3)) of the Electoral Act as amended.

Galadima who alleged that Ezekwesili had a penchant for free things, further stated that the political party was not a charity home. Speaking to journalists in Abuja, ACPN chairman charged her to emulate other candidates as regards transparency in campaign funds, stating this case was not the #BringBackOurGirls project which she championed.

His words: “It is also to ensure that that the expenditure was in order and in consonance with the objectives of the funds or donations received. In this regard, I will implore Dr. Oby Ezekwesili to emulate Omoyele Sowore, the Presidential candidate of the AAP and other presidential candidates in transparency and accountability. This is not Bring Back Our Girls.

. “In essence, Dr. Oby Ezekwesili got everything free from the ACPN, which was a great departure from her experience in the other parties where she sought a platform. Free membership card, free nomination and expression of interest and free adoption save for the sum of (N100,000.00) she said she could afford for the expression of interest form instead of five hundred thousand naira (N500,000.00), she got everything free including all logistics fo the delegates and planning for the National Convention. Dr. Oby Ezekwesil’ likes free things, but not oblivious of the African culture of appreciation and gratitude forgetting that political parties are not charity homes.”