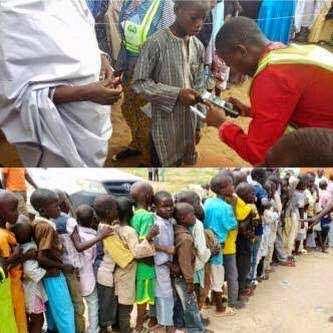 Nigerians, especially from the Southern part of the country have lamented the lopsidedness in the implementation of the laws of the land. They decried that though we claim we are one Nigeria, the laws that govern the Northerners are flexible than the ones that govern the southerners.

The complain is coming at the backdrop of the permissiveness of underage voters in Yobe State, at the detriment of their counterparts in the southern part of the country.

What could be more criminal than this for a country
where we claim to have derived our laws from the same constitution, but operate and meted punishment on offenders differently.

After the photographs of the underage voters from Yusufari Local Government Areas in Yobe State were published by Premium Times and Naira Land, it attracted divergence views from members of the public.

While many frowned at the inequality that permitted children to obtain Permanent Voters Card, PVC, and vote in the north, few persons justified the act, stressing that many of their girls whom we call children are already married.

However, apparently looking at the children who voted in the ongoing 2019 presidential and senatorial elections, there were more boys than girls in the queue casting their votes.
Some of the children voters in the pictures were being guided by INEC officials, contrary to the electoral rules and regulations.
Whereas in Ebonyi State, the underage children who wanted to try voting were dealt with. Why are we applying different electoral laws in the same country under one constitution?

Also speaking, a man who preferred to be called Star Up said: “It’s a northern thing, adding, “I served in the north many years back and I have seen worse than this while conducting bye elections.”

On his part, a man identified as Aboki justified the act. He said: “You see house wife and you call her underage? Northerners chose to dignify their women by marrying them than raping them in uncompleted buildings in Aba and Onitsha.
“Since when has small stature been made the yardstick for measuring age?”

Replying Aboki, Mallam Ahmed said: “What’s the difference between raping them and marrying them underage and then taking their innocence at a very young age when their sexual organ is yet to mature?”

Meanwhile, Mr Lala Sticlala in his reaction decried the double standard in implementing the laws of the land. He insisted that the underage voters should be punished.
He said: “Do the needful as you did also to under aged children caught in Ebonyi State. We must make Nigeria a sane nation.”