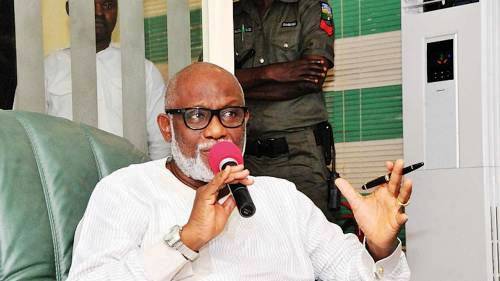 As the people of Owo Kingdom prepares to select a new Olowo of Owosso, in Ondo State, Governor Rotimi Akeredolu has vowed not to interfere in the process when the time comes.

This is just as the burial rites of Oba Victor David Folagbade Olateru Olagbegi continues this weekend.

This involved drumming in social circles and religious centres. Trading activities which continued at Omusen, Arigidi and Ogwata markets on a daily basis would last till after the burial rites are completed. Governor Akeredolu speaking in Owo said he would support whoever was selected by the kingmaker when the process commenced. Governor Akeredolu equally hails from Owo town in the Northern senatorial area of the state. While saying that it is only God that enthroned a leader, the governor pleaded with the people of the town to remain peaceful and avoid anything that can cause a crisis in the town. Meanwhile, the former governor Olusegun Mimiko while describing the late monarch as an epitome of good deeds said the monarch lived a fulfilled life.

He said, “I have no doubt in my mind that he is in the bosom of our Lord Jesus Christ. As a former governor of this state for eight years, I benefited a lot from his counselling as a traditional ruler. The former governor who was received at the Olowo palace by Chief Jamiu Ekungba, Prince Adenekan Olagbegi other Omolowos and Omo Owas, as Owo princes said the departed Olowo only transited as his good deeds are there forever as worthy legacies of his greatness. He asked the people of Owo to sustain the peace that reigned in the era of the late Olowo as he prayed for a successor of like mind for the kingdom. Chief Ekungba had while welcoming Mimiko on behalf of the kingdom asked him to prepare to be part of the funeral events. He said “You were seen as a friend of the kingdom by the departed Kabiyesi and indeed Owo people, you must be prepared to join us as we plan and execute his final rights,” Also, a Human rights lawyer, Dr Kayode Ajulo has described the late monarch as a highly cerebral first class king whose exceptional and extraordinary leadership brought high dignity to the Olowo stool as well as Owo kingdom. Ajulo in a statement in Akure said “Aside from being a father figure to me, he advised and inspired me to take up lecturing job pro bono at the state-owned Adekunle Ajasin University, Akungba in the Law Faculty where his wife is the Dean. “He will be greatly missed by those of us who are his foster children, his immediate family, Owo kingdom, Ondo state and the Yoruba nation. He added that “It is my firm belief that his family and the kingdom will continue to honour and carry on his legacy of dignity.

Biafra Will Become a Reality in 2035- Prophet Iyke Uzukwu