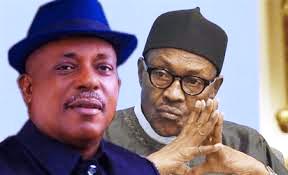 Being optimistic of victory at the tribunal, the Peoples Democratic Party, PDP, Wednesday urged President Muhammadu Buhari to, within 14 days, account for the alleged corruption and treasury looting, under his watch, amounting to over N14 trillion, before the May 29 expiration date of his tenure in office.

The PDP in a statement by its spokesman, Kola Ologbondiyan said President Buhari must demonstrate his integrity by opening up his stewardship for investigation, the same way his Presidency is demanding of other elected officials in the legislature and state governments across the country.
The party also urged chairman of the Presidential Advisory Committee on Anti-corruption, Professor Itse Sagay, to help the nation by advising President Buhari to present his stewardship for investigation for alleged corruption, instead of his (Sagay) “unnecessary fixation on court rulings on Rivers State.”

The statement read: “The PDP notes that the Buhari-led APC administration is going down in history as the most corrupt administration ever; a stinking sanctuary of treasury thieves that thrives in manipulation, deception and official concealment.
“It is totally unpardonable that President Buhari, despite his acclaimed integrity and zero tolerance for corruption, not only superintended over an administration that reeks and wallows in ocean of corruption but also refused to allow any investigation into earth shaking corruption under his watch.

“The PDP therefore demands that the Buhari Presidency should order investigation into the whereabouts of N9 trillion ($25billion) allegedly stolen in his Ministry of Petroleum Resources, through under-hand oil contracts as detailed in the leaked NNPC memo.
“The Presidency should also explain the circumstances surrounding the alleged corruption in the handling of the N2.6 trillion oil subsidy regime, particularly the alleged N58 hidden tax per litre which Nigerians have continued to bear since the fuel price increased from PDP subsidized cost of N87 to presumably unsubsidized cost of N145 as well as the reported stealing of N1.1 trillion worth of crude oil using 18 unregistered companies, allegedly linked to members of the cabal at the Presidency. Tribunal : PDP’re bad losers – Ganduje

“The PDP challenges President Buhari to allow an investigation into the alleged looting of over N40 billion Internally Displaced Persons, IDPs, funds; the over N45 billion allegedly looted from the National Health Insurance Scheme, NHIS; the alleged siphoning of $322m repatriated funds; the alleged extortion of N1.2 billion through the Central Bank of Nigeria, CBN’s Anchor Borrowers’ Programme, as well as the billions stolen under the ‘tradermoni’ project, among others. Atiku: INEC denies arrest of ICT Staff by DSS “Unless Mr. President has something to hide, he should within the next 14 days, allow for an independent inquest into these allegations of corruption.”

FG Speaks On Prof Iwu’s Discovery Of Cure For Coronavirus