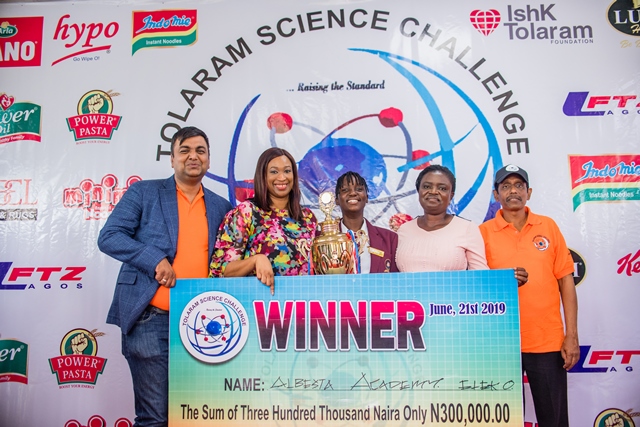 In what could be described as a display of academic excellence at its best, Albesta Academy, Eleko, Ibeju-Lekki, Lagos once again proved its mettle as one of the best schools in Lagos State as emerged the winner of the 2019 edition of the Tolaram Science Challenge for the fourth time in a row.

The Tolaram Science Challenge is a science-based competition among schools in the Ibeju Lekki axis of Lagos state organised by the Tolaram Group, one of the leading conglomerates in Nigeria as part of the group’s Corporate Social Responsibility initiatives aimed at developing and promoting science education amongst the students of the area.

Albesta Academy emerged winner by defeating Community Senior High School, Lekki in a keenly contested grand finale of the 2019 edition of the competition which was sponsored by the Lagos Free Trade Zone Company (LFTZC) and the Lekki Port LFTZ Enterprise Limited (LPLEL) with product support from other companies in the group including Dufil Prima Foods Limited, makers of Indomie Instant Noodles, TG Arla, makers of Dano Milk and Kellogg Tolaram, makers of Coco Pops.

A total of 14 secondary schools participated in the 2019 edition of the competition, which is the fourth edition from group stages to the grand finale. Eight (8) students represented each of the schools in the competition. The students were drilled in five core subjects namely; Physics, Chemistry, Biology, Mathematics and General Knowledge.

Apart from the scholarships support given to the best students from each school as has been done in every year’s edition, the overall winners for this fourth edition received cash prizes, trophies and customized tablets and all the students that participated received wonderful prizes including science textbooks.

Speaking at the grand opening, the Program Officer, Ishk Tolaram Foundation, Mrs. Laura Ede expressed her delight at the students’ keen interest in expanding their learning experience through the initiative, urging them to continue to work hard in the pursuits of their dreams.

“As educators, we know the importance of this competition in capturing students’ curiosity at an early age. This will encourage students not just to think critically and reflectively but also have the power to change the world through their problem solving skills” she said.

Delivering his goodwill message during the grand finale, the Chairman of Lekki Port LFTZ Enterprise Limited, (LPLEL), Mr. Biodun Dabiri who was represented by Mrs. Adesuwa Ladoja of (LPLEL) noted that education remains the most potent and powerful weapon to drive change in the world hence the reason the company is supporting the laudable initiative.

While presenting the first prize trophy and cash prize to the winner, Dabiri commended the hard work, diligence and intelligence exhibited throughout the competition stating that their brilliant performance has seen them clinch the first prize again.

On his part, the Chief Financial Officer, Lagos Free Trade Zone Company (LFTZC), Mr. Ashish Khemka noted that the competition was a worthy initiative that would not only assist the students but also help to nurture future scientists and Engineers that would transform the world.

“We are really glad to support this initiative. It is a competition, we believe will help change not only the fortunes of the students and the community but the world at large”, he said.

Speaking shortly after receiving the trophy, the Head of the Science Department of Albesta Academy, Mr. Owuye Aduragbemi expressed deep appreciation to the Tolaram Group for its outstanding contributions towards the improvement and development of education in the entire area, which is clearly evident in the increased level of competition and performance among the students through the initiative.