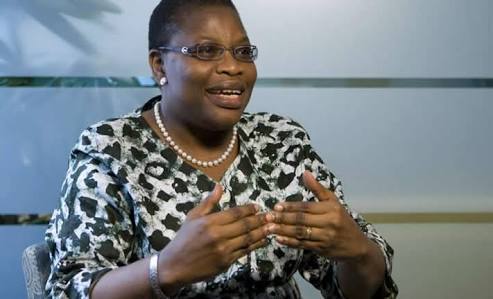 Dr Oby Ezekwesili and Timi Frank have joined other Nigerians and condemned the arrest of Omoyele Sowore by the DSS, adding that other prominent Nigerians should join the protest to free him.
Dr. Oby Ezekwesili in her Twitter handle said: “All well-meaning Nigerians should stand with  @YeleSowore and defend his constitutional right and freedom to protest any matter of Governance that worries him.
“Mr Sowore’s convening of Citizens to protest Poor Governance – via #RevolutionNow- is Constitutionally  guaranteed.
“If our @NGRPresident @MBuhari  & FG @AsoRock are not completely out of touch with the reality of distress of majority of Citizens of this country, they would handle @YeleSowore ‘s right to convene #RevolutionNow wisely.”
“I therefore join the voices of all well-meaning Nigerians to ask  for Sowore’s freedom.”

Meanwhile, political activist and former Deputy National Publicity Secretary of the All Progressives Congress (APC) Comrade Timi Frank, has condemned the purported arrest of the convener of #RevolutionNow, Omoyele Sowere, even as he appealed to other comrades not to lose focus.

Omoyele Sowore Frank said the country needs such massive protest now more than ever before because of the killings, kidnapping, banditry, hunger, unemployment, economic disaster and all manners of mismanagement going on. In a statement released to newsmen on Saturday in Abuja, to condemn the arrest of Sowere by the DSS, Timi Frank said the protest is not about the convener but about the survival of Nigeria as a country. He, however called on Tunde Bakare, Wole Soyinka, Femi Falana, Olisa Agbakoba and others who he described as ‘fathers of protesters’ to support Sowere’s idea if they are not also supporting the evil currently ongoing in the country.

According to Frank, it is the constitutional right of the citizens to protest when they are dissatisfied with anything in a democratic government. He said all over the world, citizens are expressing their disaffections without being arrested by their governments.

The Bayelsa born activist reminded General Muhammadu Buhari of how he led protest in 2003 when he was in ANPP and 2014 before he emerged Nigerian President. Frank said: “If the arrest is not resisted now, it will become order of the day to the extent that even the Labour unions and the media will no longer be free to air their views.

“Even the Abacha government did not do what this current government is doing. In Sudan, Hong Kong and other nations, citizens are protesting against their governments and nobody is arrested or intimidated. General Buhari should know that this is democracy and if it is hard for him to cope, he should step aside.

“This revolution is long overdue. It is not about the convener but about the unworkable system which has resulted in all these avoidable killings of innocent Nigerians and all manners of evil in the land. Breaking: Omoyele Sowore arrested by DSS “I therefore call on like minds, the media, the real comrades and the known fathers of protest like Olisa Agbakoba, Femi Falana, Tunde Bakare and others to act now or else their names will become history for keeping quiet in the face of evil.

Five suspects in Police net over Ekiti Killing(Opens in a new browser tab) “I also call on the international community, especially the American government to speak up because Sowere is also an America citizen fighting for the betterment of our society.”