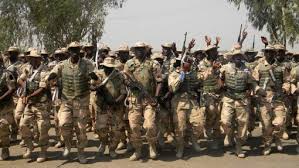 Two Boko Haram fighters that were attempting to plant Improvised Explosive Devices have been killed by the Nigerian troops..

Troops of 26 Task Force Brigade under Operation Halaka Dodo, a sub-exercise of Operation Lafiya Dole, shot dead the insurgents. The Boko Haram were defeated by the Nigerian troops after a night of ambush at the Wala crossing point.

The army said on Thursday that despite a downpour, the terrorists attempted to bury the IEDs on the road. However, two of them were killed by the troops, while others escaped with gunshot injuries.

Minimum Wage Saga: Adopt The Principle of Give And Take – NECA Boss

Police Gets I.G Order To Use Force On Rioters