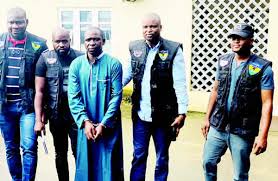 Report of the Presidential Panel investigations on Wadum’s alleged crime has been submitted to the Chief of Defence Staff.

You will recall that the Chief Of Defence Staff gave the panel a one-week extension to do a thorough job.

It was gathered that having received the report, the CDS would study it and make recommendations on it. The CDS recommendations would be submitted to President Buhari who will  give final directives on its implementation.

It was however gathered that the panel recommended stiff punishment for both soldiers, policemen and other officers found culpable.

The reports recommended that the offices who connived in the killing of the IRT operatives and the civilian  would be punished. Those who allowed Hamisu Wadume escape also should be punished.

Trouble started when three Police operatives of the IGP Intelligence Response Team were killed by soldiers in Taraba August 6, 2019. The killings were executed when kidnapper, Hamisu Wadume was first arrested.