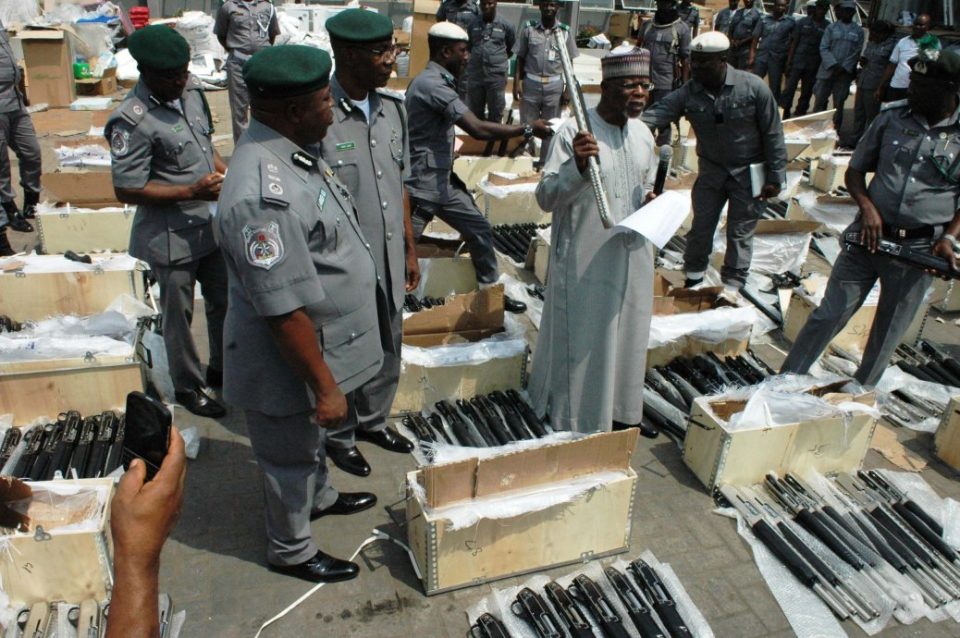 A special task force against smuggling, has intercepted smuggled items worth billions of naira in the past one month.

Speaking with journalists in Ilorin at the weekend, the assistant comptroller general of the Customs Service, Aminu Dahiru itemized the seized item.

According to him,  the smuggled items include PMS, diesel petroleum products, cars, fairly used clothing, hard drugs and food items.

The seized items were intercepted along Nigeria border towns and market places in Kwara, Niger, and Benue states.

READ ALSO: Politicians are Behind Religious Crisis In Nigeria – Sultan

Dahiru explained that a total number of 600 units of 250-litre drums of petroleum products were intercepted at Chikanda border town in Baruten local government area of Kwara State while being smuggled outside the country.

He also said that a large number of empty drums of petroleum products were seized in the operation.

Dahiru said that 659 bags of suspected foreign rice, 32 empty sacks of foreign rice and sealing machine were also seized from a warehouse in Ilorin.

He also said that the joint border operation drill, code-named, Ex-swift operation, was carried out in four zones of Port Harcourt, Lagos, Ilorin and Katsina, with the aim of guarding Nigeria border lines against smuggling. And to ensure industrial growth, promote agriculture and improve national security.

He lamented that the country had become a dumping ground for all imported items, saying that local production and development had suffered.

The assistant comptroller general in charge of enforcement, investigation and inspection at the national headquarters, who also led the north-central zone of the operation, said that smuggling had gone for too long in the country.

He disclosed that  importation of small arms and ammunition had made the country unsecured, while use of second-hand clothing had negative health effect in many communicable diseases.

He called on Nigerians to be united against smuggling and cooperate with law enforcement agents in that regard. Smuggling is stealing from the commonwealth of the nation and makes people lazy,” he said.

Politicians are Behind Religious Crisis In Nigeria – Sultan

5 Things The Stock Market Doesn’t Give A Hoot About