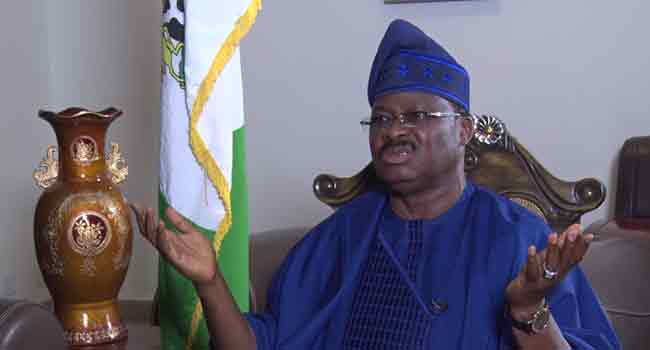 Immediate-past governor of Oyo State, Mr Abiola Ajimobi has lost his senatorial ambition when the Tribunal adjudged  the election of Senator Kola Balogun of the ruling Peoples Democratic Party (PDP) as winner of the last election.

This is just as the Oyo State National and State Houses of Assembly Election Petition Tribunal sitting in Iyaganku, Ibadan, on Tuesday, upheld Balogun’s election.

The matter with case number EPT/OY/SEN/12/2019 has the All Progressives Congress (APC) as the petitioner while the Independent National Electoral Commission (INEC); Dr Kola Balogun and the Peoples Democratic Party (PDP) served as the first, second and third respondents respectively.

The judgement which lasted about three hours was read by Justice Akpovi on behalf of other members of the panel.

Justifying the decisions of the panel to throw out the petitioners prayers, the panel held that the APC failed to prove the petition beyond a reasonable doubt, arguing that only 11, 759 votes were in contention out of the total votes scored and recorded in the election.

Also, it added that even if all the prayers of the petitioner were granted and the votes in contention added to its score, the respondent would still have won the election with about 1,743 of the total votes cast.

Faulting the reliance of the petitioner on perceived anomalies with the card readers, the panel held that manual registers were also deployed for use in cases where card readers disappointed, a practice which was known and consented to by all the party agents at the polling units in contention.

Additionally, the panel faulted the appearance of party officials who came to testify in the stead of polling agents who were supposed to tender the result, as well as the presentation of the card readers, result by just anybody instead of the INEC ICT official who signed and approved the result.

A former Attorney-General and Minister of Justice, Chief Akin Olujinmi (SAN) had led the legal team of the petitioner (APC) during the hearing stages, while Mr Isiaka Olagunju, Tunji Ogunrinde and Oluwasesan Dada led the teams that represented the first, second and third respondents respectively.

Recalled that INEC had after the February 23 Presidential and National Assembly elections announced Dr Kola Balogun of the PDP the winner, but the result was contested by the APC whose flagbearer was ex-Governor Ajimobi.

While the petitioner through the lead counsel, Chief Olujinmi had prayed the tribunal to nullify the election in some areas of the district due to certain discrepancies and as well ordered a fresh election, all the respondents in their separate presentations were praying the tribunal to dismiss the petition and as well grant substantial cost as compensation.

According to the panel, while giving its judgement, a total of 46 witnesses were called while 366 documents were tendered by all the parties.

As soon as the final judgement was announced, the courtroom which was filled with the respective party supporters erupted with songs and jubilation by the members of the victorious camp.