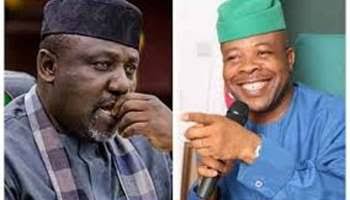 A Member representing Mbatoili/Ikeduru Federal Constituency of Imo State, Hon. Henry Nwawuba has expressed disappointment at the judgement of the National Assembly Electoral Tribunal which dismissed the petition of Hon. Jones Onyereri challenging the return of former Governor Rochas Okorocha.

In a press statement made available to newsmen in Abuja on Tuesday, Hon. Nwawuba lamented the outcome of the judgement, describing it as a temporary setback.

According to him, “Nigerians will recall that a new dimension was introduced in politics in Imo West Senatorial District where a returning officer was hijacked and forced to declare former Governor Okorocha winner at gunpoint, even the electoral umpire, INEC stated this fact in its official report.”

Hon. Nwawuba wondered what facts were relied upon by the Tribunal in reaching its conclusion when all material pieces of evidence on the ground pointed to gross abuse of the process culminating in the sham declaration of Okorocha as Senator.

READ ALSO: I Will Appeal, Reclaim My Mandate- Orji Kalu

“The incontrovertible fact on the ground is that Okorocha based on his dismal performance in office as Governor for eight years made him unelectable and this accounts for his employment of the dark arts to be declared the winner.”

The lawmaker called on the people of Imo West Senatorial District to remain calm and expressed hope that the judgement would be reversed at the Appeal Court and Hon. Jones Onyereri would assume his rightful place as the senator representing them.

One Fears Dead as NURTW Members clash at Ogba