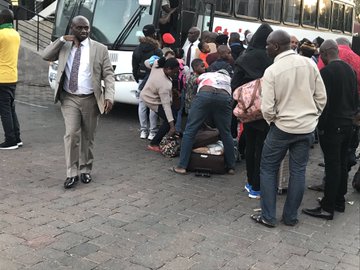 No fewer than 600 out of over 800,000 legally living in South Africa have Wednesday boarded to Nigeria due to xenophobic attack.
Nigerians in the country queued for hours to take the three buses from the consulate to the airport, and the flight, which was supposed to take off at 9:10 AM, was delayed by almost 2 hours.

eNCA’s Heidi Giokos shared photos on her Twitter of the Nigerians, both at the consulate and at the airport. A woman with 3 young children told her that  she is leaving to ensure the safety of her children, as she was sleeping with an open eye. 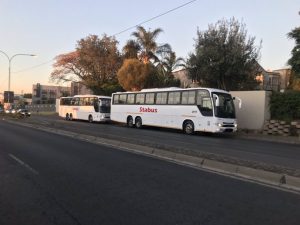 A Nigerian man, who spoke to her at the OR Tambo International Airport, said he had no choice but to leave.

Many of the Nigerians have, however, been unable to board the flight due to expired documents and overload of luggage per individual, although, the officials in charge tried to find a temporary solution to get the people on the plane.

Still, some of the returnees could not board the plane without proper documents for both parents and children, and some were sent back because they had no documents for their children.

Eventually, about 2/3 of the families were reported to have made their way back over a lack of proper documents.

“We understand that after an almost 6-hour delay. Passengers are boarding the plane. Still unclear as to whether or not the second plane will land tomorrow. More details will come from the Nigerian Consulate,” Heidi Giokos wrote