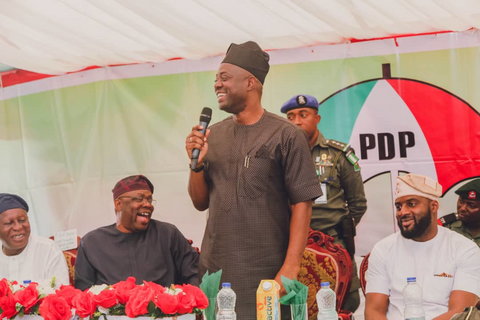 The South West Zone of the Peoples Democratic Party(PDP) has expressed disappointment over Wednesday’s verdict of the Presidential Election Petition Tribunal.

The News Agency of Nigeria (NAN) recalls that the PDP and its candidate, Atiku Abubakar, had approached the tribunal in Abuja seeking the nullification of the victory of President Muhammadu Buhari in the Feb. 23 poll.

But delivering judgment on the matter, Justice Mohammed Garuba dismissed all the grounds of the petition.

The position of the PDP in the South West Zone was contained in a communiqué issued on Thursday at the end of its stakeholders meeting held at the Government House, Ibadan.

The communiqué was read by Dr Eddy Oyefeso, the party’s National Vice Chairman.

It stated in part: ”PDP takes serious view of the petitions of our party’s candidate, Alhaji Atiku Abubakar, and therefore put on record our disappointment that justice was not done.

”In view of the plethora of evidences laid before the tribunal, we resolve to support the party to appeal against same at the Supreme Court.”

”While we continue to accord due respect to the judiciary, it is essential that its rulings and verdicts command the respect and confidence of the citizenry in the interest of the nation.”

The party further resolved that PDP must review the conduct of off-season elections in the South West.

Meanwhile, the party said that moves of Gov. Seyi Makinde of Oyo State confirmed his determination and preparedness to drive the frontiers of development to new heights in the state.

Makinde implored every PDP member in the zone, especially its leaders to be more united so as to achieve its goal of capturing all the states in the zone in the next general elections.

He asserted that the leaders must have a common goal of capturing states, irrespective of who had the ticket of the party in the states.

Among the dignitaries at the forum were Mrs Bucknor Akerele, Mr Jimi Agbaje, Prof. Olusola Ekeka and Chief Tajudeen Oladipo.

Collapse Building: No Lost Of Any Life – Police