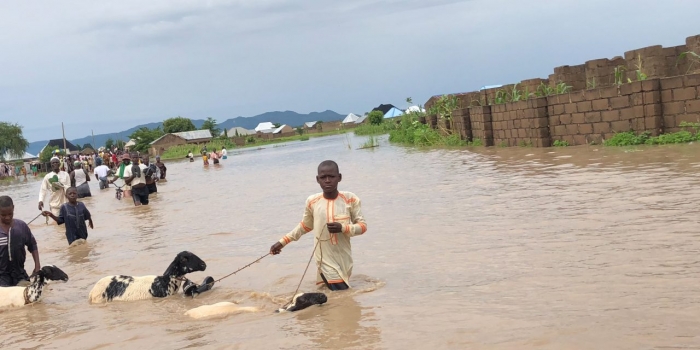 The Nigeria Hydrological Services Agency (NHSA) has declared that 13 states across the country would witness increased floods following the rise in the water levels of Nigeria’s two major rivers – River Niger and River Benue.

According to NHSA, water from six out of the nine countries that make up the Niger Basin Authority (NBA) is pouring into the country and could lead to severe flooding in these states.

The director-general of the agency, Clement Nze, said this at press conference in Abuja while giving update on the situation of flooding in the country.

Nze said latest information received on September 6, 2019, from the headquarters of the NBA in Niamey, Niger Republic, confirmed steady rise into the Red Alert Zone up to 6.26 metres of the flood level of River Niger monitored in Niamey.

He listed the states at risk of more flooding from the two major rivers to include: Kebbi, Niger, Kwara, Nasarawa, Kogi, Edo, Anambra, Delta, Rivers and Bayelsa.

Other states likely to be affected by the river flooding, according to him, are: Adamawa, Taraba and Benue states.

“Information received on September 6, 2019, from the headquarters of the Niger Basin Authority (NBA) in Niamey, Niger Republic, confirmed steady rise into the Red Alert Zone up to 6.26m of the flood level of River Niger monitored in Niamey.

“This development was promptly communicated to Mr. President through the Minister of Water Resources. The flood sighted in Niger Republic was expected to arrive the Nigerian border through Kebbi state around September 16, 2019, would finally find its way down to Kwara, Niger, Kogi, Edo, Anambra, Rivers and Bayelsa state.

“This development was equally communicated to relevant states and stakeholders, especially the operators of Kainji and Jebba dams for their necessary actions. Owing to spilling of water from the two dams for nearly two weeks, including Shiroro dam on River Kaduna, there has been steady rise in the flood level of River Niger with the attendant flooding downstream the dams.

“As at today, September 16, 2019, the Lagdo Dam in Cameroon is still impounding water. It is not yet certain if there will be release of water from the dam in 2019. However, River Benue is rising steadily owing to local rainfall with attendant heavy inflows from the tributaries of the river. “This is likely to cause river flooding in Adamawa, Taraba and Benue states.”

Nze said localised urban flooding being witnessed in some cities and communities are expected to continue because of high rainfall, rainstorms, blockage of drainage system and poor urban planning.

He said it was regrettable that flooding incidents were manifesting just as predicted by the agency, adding that relevant stakeholders, especially individuals and state governments, had failed to heed the warnings issued by the agency before the onset of flooding season in the country.

Nze urged states and local governments to remove structures built within the floodplains, clear blocked drainages, culverts and other waterways as the country expect river and coastal flooding from the upper catchment of the Niger Basin to manifest.

NIHSA is the federal government’s agency that has the mandate of monitoring all the major rivers in Nigeria including the trans-boundary Rivers Niger and Benue, among other functions. (NAN)