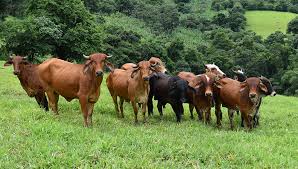 In response to the crisis between herders and farmers, Anambra State is taking a lead in the cattle ranching initiative.

To this end, ranches are springing up in some parts of the state. One of the major cattle ranches in the state is Nkeonyemetalu Farms and Agro Ventures Limited, located at Awgbu-Amaetiti in Orumba North Local Government Area.

The farm, situated on over 158 plots of land, is already carving a niche for itself in cattle ranching, fishery, poultry, piggery, as well as plantations of different crops.

According to the chairman of the farm, Chief Walter Chigbo, it started two years ago and has over 58 Fulani cows and 17 local ones (efi Igbo), which are being used for cross breeding.

He said the ranch had gulped over N600 million so far and will still involve more money.

Speaking to Daily Trust on Sunday in his farm at Amaetiti, Chigbo said ranching was a more profitable way of rearing cattle, and called on Nigerians to embrace it as it is done in other parts of the world.

“I looked at what is happening now, where herders and farmers are always clashing due to grazing on farmlands and decided to go into ranching.

Originally, I had wanted to do poultry and agro cropping, but with this challenge, I decided to venture into ranching,” he stated.

The farmer said he got more zeal to invest in ranching when he travelled to Holland and the United Arab Emirates in the past and saw cattle in ranches and they looked very big and healthy “When I came back from the trip I decided to give it a try.

And I can tell you that it has been very successful. It is worth embarking on. Cattle in ranches are better in terms of milk and beef production.

“The problem is that when ranching is mentioned, people tend to believe that it is all about building mansions where cows are kept.

But one does not need much to keep his cattle in a confined environment. “Having a ranch is far better than allowing cows graze on the field from Maiduguri to Benue, Katsina to Anambra.

“You don’t need to build a large house to keep them, all you need is to put them in a secluded place, feed and let them rest.

“If people can buy into ranching, I am very optimistic that it will save the country from the embarrassments emanating from herders-farmers crisis,’’ Chief Chigbo added.

“We have five other farms, apart from this one, which is the biggest. During the rainy season, most times we move them from one farm to another where they can graze.

The main issue is that we don’t allow them to go out and destroy crops in the name of grazing,’’ he said.

He said they stored wheat, sorghum, dry groundnut peels and others, with which they feed the cows when they are not grazing in the ranch.

“We buy our wheat from Lagos at the cost of N4,000 per bag, including transportation. And one bag can feed 10 cows for a day because we serve them morning and evening.

At the end, we can also serve them grasses. “We also employ somebody whose job is to go to the bush every day to cut grasses for the cattle.

We also have a veterinary doctor who takes care of the health of the animals here,’’ he explained. Factors affecting demand and supply.

He said people were requesting for their produce, but the roads to the farm are bad; hence it requires much transportation fares.

“People who want to buy our produce cannot come because of bad roads. So they rather ask us to bring the produce to them in their places instead of coming here,” he said.

He also complained of the absence of electricity, adding that the farm runs on generator for 24 hours on a daily basis. Going into milk processing.

According to Chief Chigbo, agriculture at the peasant level is poor, but having integrated farming makes it a very robust and profitable business.

“When you rear cattle you make more gain from the milk than the meat. You process it into yoghurt and refine it into evaporated milk; that is where you make much profit.

“To be sincere with you, there is no farming unit that is not profitable; it all depends on how you manage it. Ranching of cows is more profitable when you process the milk.

It should not be about one-man coming to buy one cow because he is organising a ceremony,’’ he explained. He said the farm would soon install its cold room to store meat for sale to the public.

“For now, we have not started processing the milk or meat. But one thing I know is that what we are doing here will end in processing,’’ he said.

He said the emergence of ranching in Anambra State is a welcome development, adding that it would bring back the lost glory of ‘efi Igbo’, a special cow breed of the Igbo, which are almost going into extinction.

He said it would also curb the incessant clashes between herders and farmers. Other priorities of the farm Apart from cattle, Chigbo said the farm had 50,000 birds which produce 800 to 1,000 crates of eggs every day.

“We spend much money on water. Someone may say this is a swampy area where one can get water very easily, but we are facing a serious water problem.

“We have 15million cubic metric tons of water tank and several overhead tanks that supply water to this farm.

We also make do with water from a nearby river, about a kilometer away during the dry session,” the farmer said.

The farm also grows agro commodities like tomatoes and maize. In recent years, cattle grazing has led to clashes between herders and farmers in Nigeria, subsequently leading to deaths, destruction of farmlands, property, loss of animals and displacement of families.

To tackle this problem, many Nigerians have advocated cattle ranching as a major solution.

Why Nigeria’s Cargo Importation Drops By 70%