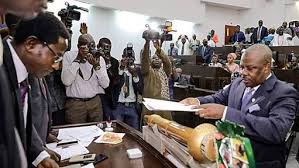 The three-member tribunal, led by Justice Adenike Josephine Coker, dismissed the petition filed by Hon Oluwawemimo Olutobi of the Allied Peoples Movement (APM) challenging the victory of Oluomo, saying the petitioner failed to prove his case beyond reasonable doubt.

Olutobi had filed a petition numbered, EPT/OG/HASS/13/19 to challenge the declaration of Oluomo as the winner of the Ifo 1 state constituency by the Independent National Electoral Commission (INEC).

The petitioner, who joined Oluomo in the case as the second respondent and INEC as the first respondent, alleged that Oluomo was not duly elected on the grounds of over-voting, noncompliance and illegal use of Permanent Voter Cards (PVCs) and prayed the tribunal to nullify Oluomo’s election and order a re-run as an alternative.

But Justice Coker while delivering her judgment said, the tribunal has no other option than to rule that the petitioner failed to prove his case beyond reasonable doubt.

“This tribunal cannot solely rely on the smart card readers as evidence, therefore the tribunal has no other option than to submit that the petitioner failed to prove his case on over-voting.”

In the third judgment, Justice Coker panel threw out the petition filed by the immediate past Commissioner of Information and candidate of APM, Dayo Adeneye, against election of Hon Atinuke Bello, for Odogbolu constituency.

The tribunal equally upheld the election the State Assembly Deputy Majority Leader,Bashir Oladunjoye Abdul, as a member representing Sagamu I constituency on the platform of APC.

Oluomo in his reaction to the judgement appealed to the members of the opposition-APM to join hands with us to move the State forward.

His words, “I dedicate the victory both at the poll and at the tribunal to God and the good people of Ifo 1 state constituency and finally to the governor (Prince Dapo Abiodun) for the support so far.”

“For me and my other colleagues who also won at the tribunal, we are rededicating ourselves to serve the people better and the more now that the cases are no longer there.”

Speaking on whether the petition has been a distraction to him, Oluomo said, “It should be somehow because nobody will have a case in court and go to sleep. You don’t rely on your own strength, so when somebody challenge you, you must be ready, you get your lawyers, you get your witnesses and you get a lot of things to debunk it.”

“The tribunal has not really affected my performance, but it is a behind thought that is pinning you behind that something is still holding you,” Oluomo added.