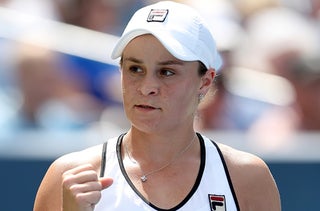 World number one Ashleigh Barty battled into the China Open semi-finals on Friday with a gutsy three-set victory over familiar foe Petra Kvitova.

The Australian came from a set down to win 4-6, 6-4, 6-3 and plays Ukraine’s Elina Svitolina or Kiki Bertens of the Netherlands in the last four in Beijing.

This was the sixth meeting between Barty and two-time Wimbledon champion Kvitova, with the Australian winning only one of her previous encounters against the Czech.

Barty, 23, who had strapping on her left calf, was under pressure immediately in the deciding set after seventh-ranked Kvitova broke her first service game.

But reigning French Open champion Barty grabbed the break back immediately and, with the clock ticking past two hours on court, broke Kvitova again for a decisive 5-3 lead.

Criminals Sell Vehicle for N750k after Drugging the Owner

Why I Resigned As Minister – Douglas Ross