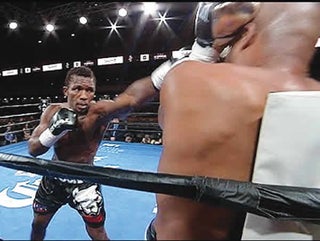 After recording his ninth professional win on Saturday in a fourth round knockout win over American Larry Pryor, Efetobor Apochie has declared he is the best cruiserweight boxer in the world and will stop at nothing till he gets the belt.

Apochie turned professional in 2017 and has gone nine fights without a loss, winning all courtesy knockouts.

The 2014 Commonwealth Games bronze medalist says his aim is to reach the top of his division (cruiserweight) and after seeing other boxers in the category and their style, he insists that nothing can stop him from attaining his set goals.

“I didn’t come this far just to come this far, and I don’t see anybody stopping me right now. I’m a man on a mission and I will do anything for the victory.

“I’m too hungry; I’m the most dangerous cruiserweight in the world. I’m strong and awkward nobody can beat me. Yes I said so,” he wrote on Instagram.

Apochie added that the secret to his wins was the right mentality.

US to Iran: We’re Open To Discussion As Trump Warns Against Killing Protesters