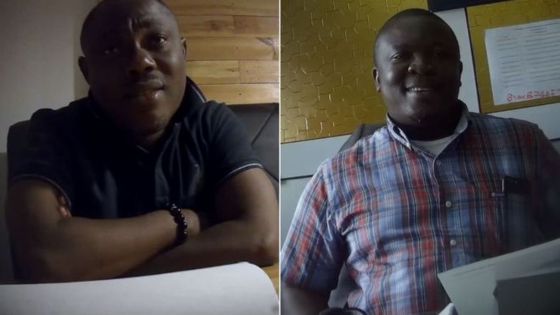 Professor Ransford Gyampo and Dr Paul Kwame Butakor from University of Ghana have been suspended over sex for grade scandal.

The two Ghanaian lecturers were secretly filmed while sexually harassing undercover BBC reporters (in the Sex For Grade documentary). They were suspended pending the completion of investigation by the school authorities. Both Professor Gyampo and Dr Butakor denied any wrongdoing.

The suspensions follow similar action against two lecturers in the University of Lagos who were also filmed by the BBC.

Footage of the University of Ghana lecturers was broadcast on Monday as part of a documentary by the BBC’s Africa Eye investigative unit, exposing sexual harassment and misconduct by lecturers at prestigious institutions in West Africa.

The University of Ghana said Professor Gyampo and Dr Butakor had been called to appear before a committee to give evidence.

The University of Lagos in Nigeria also suspended two lecturers Dr Boniface Igbeneghu and Dr Samuel Oladipo and established an investigative committee after the Sex For Grade video went viral.

Speaking after the broadcast of the film, the chairperson of the Anti-Sexual Harassment and Misconduct Committee at the University of Ghana, condemned the conduct of the Ghanaian lecturers seen in the footage.

READ ALSO: UNILAG’s Tsunami of Suspension Over #Sex for Grade Hits Another Lecturer

“Unacceptable, inappropriate behaviour that is really an affront to their positions as lecturers at the University of Ghana,” Dr Margaret Amoakohene told the BBC’s Thomas Naadi in Accra. She said the committee would make recommendations to the university authorities only after an investigation had concluded.

“What we are doing now is to open our doors to other victims to come and testify to us as to what their experiences have been, whether they are current students or past students,” she said.

“We invite them to come and tell us.” In a statement published on Tuesday, the University of Ghana said it had created “additional communication channels” for members of the university community to report harassment, including a dedicated email address: hearmystory@ug.edu.gh.