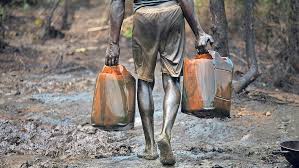 The House of Representatives has stressed its resolve to tackle crude oil theft in the country and end recurring shortfall in crude oil revenues, hence, its resolve to probe serving and retired military officers.

House of Representatives The chairman of the Ad hoc committee on crude oil theft, Hon Peter Akpatason, who said this yesterday at the inaugural meeting of the committee, lamented the continuous pilfering of oil by a cartel in the country, with the assistance of some officers of the Nigerian Military and ex-servicemen.

Akapatason who is also the Deputy Leader of the House decried the alarming rate of oil theft recently. He recalled that the Federal Government under the leadership of former president Olusegun Obasanjo, set up a committee to look into oil theft in 2001, which reported that oil theft by a group of highly placed persons posed a threat to the oil sector.

He said that the committee will hinge its enquiry on 2001 findings to uncover those behind the crime. “Oil theft is a very serious problem that is as old as the oil industry itself. Oil theft has assumed a very alarming rate in recent times.

“As far as back as 2001, the federal set up a committee which noted a major threat to Nigeria oil industry arises from the activities of a cartel or mafia which comprises highly and powerful placed individuals running a network of agents to steal crude oil and finished petroleum products from pipelines in Nigeria.

And could be possible enjoying the patronage of some retired or top serving military or security personnel, political allies of government who benefit from the illicit oil business and have persistently frustrated efforts by the international community to assist Nigeria in fighting the menace.

“This a very serious allegation by the committee set up by former president, Olusegun Obasanjo and we are going to take up this investigation from that perspective to look at who are actually responsible and how we can stop this criminality and ensure that revenue derivable from the oil and gas sector is exactly what we ought be getting what in this country, nothing short of that”, he said.

Recall that on September 26, the House through a motion raised the alarm that Nigeria was losing about N5 trillion annually from oil theft and about 22 million barrels of crude oil, counting for about N1.3 trillion loss of crude were stolen in the Niger Delta in 2019 alone.