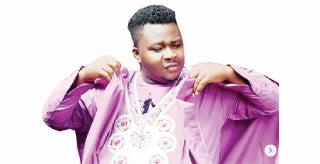 Onoruvie Godswill, aka Bro Solomon/Laughpillscomedy, is a comedian with a following of over 500,000 on Instagram. He tells TOLUWALOPE KAREEM about his journey so far.

How did your journey into comedy start?

It started when no one was there to help me. I have always wanted to act. However, actualising the dream was very difficult. I remember back then, I used to go to movie locations to beg for roles, but I was always turned down.

I didn’t want my passion to die just like that, and it was in the course of thinking deeply about what to do that the idea of online comedy skits came to me. I tried it out and I realised it was a good one, so I delved into it fully and have been giving it my best since then.

How would you describe the experience of being a social media celebrity?

It has being an awesome experience. The major highlight, for me, is being able to touch and impact on people’s lives with my skits. I get a lot of praises and positive feedback from people, which makes me delighted.

I have got a lot of testimonies from people on account of my skits. There was a time a lady called me and told me she was going for an operation. She was really scared and nervous, and had already given up on life. However, before the operation, she was going through her Instagram page and suddenly, my video popped up and she watched it. She said she laughed so hard and felt relieved. The fear she had before the operation abated and at the end of the day, the surgery was successful.

A girl also once told me that she had wanted to end her life because she was in a bad situation with her boyfriend, until she came across one of my videos online. She then watched others and laughed so hard to the point that she forgot about the situation she was in and what she was planning to do. She eventually sent me a sum of N20,000. There was also a time a fan gave me N100,000— he said my contents always got to him and made him laugh, so he decided to appreciate me. Getting feedbacks like that make me so proud of myself. Also, I feel happy whenever I go out and people recognise me.

However, I believe I am not a celebrity yet. I’m still working hard to get to that point. But, with the little I have attained, the experience has been interesting.

You are known for your distinct facial expressions, and at the end of your skits, you always pull your slippers and run. How did that become a feature in your skits?

My facial expressions are usually determined by the situation at that moment. The expressions balance the skits and make them funnier. In my skits, I mostly happen to be in one situation or the other which would warrant me needing to escape, so I always have to run away at the end. It started from one of my skits where, based on the script, I was a youth leader and I impregnated my pastor’s daughter. During the service she had come to testify and it was discovered that I was responsible for her pregnancy, so I had to run away. The video went viral and I got a lot of praises for the way I ran. I then adopted that style and it has since become a trademark.

News of My Death not Publicity Stunt- Sky B