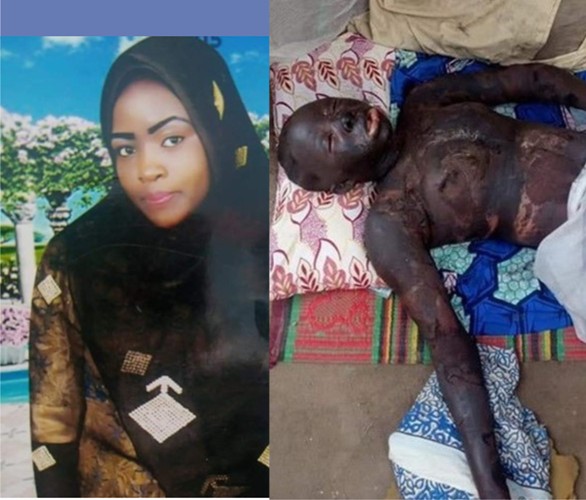 Aisha Muhammad,17 who set herself ablaze in Zamfara state over her fiancé’s inability to marry her has eventually died today.

He said Aisha died in the early hours of today (Wednesday) after she was taken back to her bed from bathroom at the Federal Medical Facility in Gusau.

T “She was completely wrapped in bandage and she was taken to the bathroom where the bandage was removed so that new round of medicinal application would be conducted on her.

“On return from the bathroom, she gave up the ghost. We have been battling for medical bills since she was admitted here 45 days ago.

“Just two days ago, we received a medical prescription that cost at least N26,000 and we couldn’t buy the medicine because we had no money”

“Yes, of course, we received donations from public-spirited individuals and we are very grateful for their concerns.

I can tell you that we had spent over N700, 000 on medication and the money came largely through donations.

But with the severity of the burns all over her body, the money was little compared to what was actually needed for the medication,” Aminu added.

Recall that Aisha, living in Albarkawa area in Gusau metropolis in Zamfara state, early September, set her self ablaze owing to her fiance’s inability to marry her due to his poor finances.

She decided to commit suicide after she learnt that her fiance, who dated her for quite a long time, had no money to pay for her dowry in preparation for her wedding.

Her lover, called Umar, was asked by her parent to present himself to her family for the marital engagement but the young man told her parent that he was not having the money to pay for the N17, 000 dowry demanded by the father of the girl.

She then got herself drenched in petrol and ignited a fire and within a second, she got engulfed in flames. She was taken to the Federal Medical Centre, Gusau where she died.

Jihadist Killed 89 Soldiers In Niger and Not 25 Says, Government