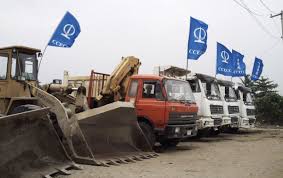 The Chinese Civil Engineering Construction Corporation (CCECC), the firm handling the construction of the Lagos-Ibadan rail project, has assured residents in Yaba and Mushin area of adequate engineering solutions to the many blocked drainages in Lagos.

Speaking to journalists at the weekend during a tour of about 23kilometres stretch inside the 45kilometers Section One stage of the Lagos-Ibadan rail project, spokesman for CCECC, Mr Abdulrauf Akinwoye stated that many of the water pipes distributing water in Lagos are blocked.

According to him, “from the Apapa Port to Ebute-Metta axis and down to Iju area of Lagos, the CCECC is determined to deliver a first-class double-track standard gauge rail project.

Our target is to ensure Nigeria’s economy is buoyed by a very strong rail system.

“We know that there are lots of impediments along this Lagos axis, which the Minister of Transportation confirmed during one of his recent inspection.

However, I am happy to inform you that at CCECC, we have technocrats who have handled even more challenging projects across Africa.

“For gas and water pipelines in Lagos, the CCECC will deploy uncommon engineering solutions to either encase them or redeploy them without worsening the plights of the residents in Lagos.

“We know that so many affected communities have been complaining about the project affecting their farms and other means of livelihood.
We, however, wish to appeal to these communities to remain calm and be patient with us.
We remain socially responsible and want to give the communities a modern drainage system compared to what they have now, which were constructed years ago and are currently blocked.
With this, the issue of flooding which is persistent to some Lagos communities like Mushin will be over.

“We are also constructing a mega culverting system in Ikeja area, where the movement of the trains will not disrupt vehicular flow at Ashade area.

The culvert being constructed at Ashade will allow the normal dual carriageway for vehicular movement into the Ikeja GRA area and also Agege area of Lagos.

“We are not unaware of complaints from residents of affected areas, so we have taken into consideration the Environmental Impact Assessment (EIA) and Social Impact Assessment (SIA) of the project, and we will deploy all possible means to ensure that Nigerians don’t suffer because of this project.”

How To Find, Lock Or Erase Lost Android Device