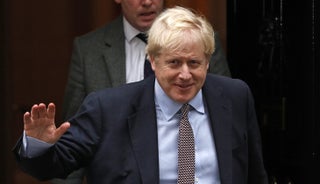 Lawmakers late Tuesday put aside their disputes and overwhelmingly supported Johnson’s call for a snap general election on December 12.

The decision came two days before Britain was due to leave the European Union after 46 years and a few hours after Brussels granted London more time to secure parliamentary backing.

Parliament now has up to January 31 to lend their support to Johnson’s divorce deal so that Britain can move past its biggest political crises since World War II.

But European Council chief Donald Tusk has warned the bloc’s other 27 members may not grant Britain more time — similar words to those issued before the last extension in April.

Party leaders wasted no time in rolling out their messages even before the launch of their parties’ official manifestos.

Johnson immediately rallied his parliament members after the vote with a promise to “get Brexit done” while conceding he was in for a hard fight.

The Conservative leader heads a minority government, which has hindered his ability to push through legislation in parliament. He is now hoping to turn that into a majority.

“It’ll be a tough election and we are going to do the best we can,” he said.

Pro-EU supporters from big cities have been at loggerheads with Brexit-backing groups such as trade unions as well as party leader Jeremy Corbyn.

But the veteran socialist is an energetic campaigner who nearly managed to secure an upset victory in the last general election in 2017.

Corbyn calls the vote “a once-in-a-generation chance to transform our country” and is promising “the most ambitious and radical campaign for real change”.

His deputy and finance spokesman John McDonnell hailed his boss’s abilities on the stump.