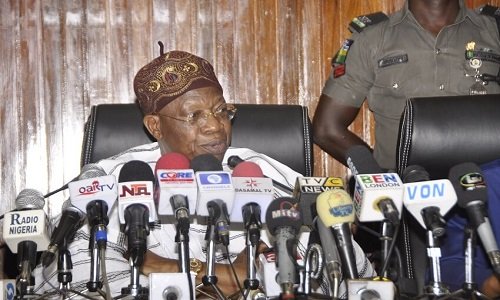 The Federal Government has announced that social media will be strictly regulated.  That is like flinging the red flag at a raging bull — the raging bull of the rights lobby.

Since Information and Culture Minister, Alhaji Lai Mohammed, announced that step as new government policy, not a few have bristled with rage and threatened Armageddon.

Each zealously guides and guards its turf!

So, if the human rights lobby raises hell, when government talks of regulation, even of the anti-social end of the social media, the ideologues in the rights ensemble would kick.  The first reaction, which is instinctive, is ideological.  But the second, to be fair, is practical.

The notorious fact is when the government seizes control, it never holds back and would love to grab more.  Eternal vigilance is the price of liberty is no empty talk!

Still, that can be tweaked, as the rights lobby too is known, all too well, to essay waywardness and recklessness, under the guise of citizen rights under the law.

So, that is why the security-conscious government scowls; and the rights lobby sneers right back.  To your turf, o Israel!

Still, this reckless penchant to turn sacred rights under the law into a brazen, wayward abuse of the process is firing the (anti) social media, breeding fake news, reckless rumours and heinous lies.  It is such an ugly gargoyle that the society is collectively the worse for it.

Take, for instance, the fictional Aso Rock wedding that never was.  Or the Jubril Al-Sudan vicious tale.  Or even the Onitsha tanker blaze, which IPOB instantly claimed was deliberate and savage attack by northern Muslim vandals, on a repressed and helpless southern Christian community?  Pray, which part of the country does not experience tanker fires?

Now, evil thoughts are not new.  By Sigmund Freud’s psychoanalysis, they reside, in their most concentrated form, in the id.  Because the conventional media is properly structured, it filters the news through its institutional ego (internal quality control).   If that fails, it knows the severe consequences of societal super ego (legal sanctions: libel and allied torts) on its brand equity and institutional prestige.

The so-called social media — otherwise called the new media — isn’t  bothered with such strictures or niceties.  Whatever rumour or evil fabrication flies on its reckless wings — fact, fidelity and decency be damned!  That is where the social media gets its notoriety from; and that is where it becomes anti-social media,unfazed by the social tension it regularly unleashes.

If things get to a head (as they are clearly getting now), it would give the governing order the justification to move from its security fort, to invade the rights forte, at the other end of the continuum.  The end result might be good or bad, depending on the motive of the government.  As a rule, however, democracy teaches huge skepticism, whenever the government goes regulating the media.

As it is, however, ideological rage and bluster, from the rights ensemble, are not enough.  Rather, the rights groups must instil or even impose a sense of nobility, moderation and responsibility on social media channels, making them less anti-social.

Why I Killed My Girlfriend- Shocking Confession from Pastor Eze