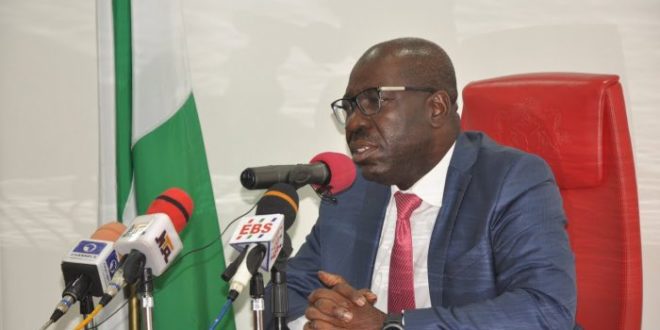 All Progressives Congress (APC) in Edo State was divide over the attack on Governor Godwin Obaseki and Oba of Lagos, Oba Rilwan Akiolu at the residence of National Chairman of the APC, Comrade Adams Oshiomhole.

Some of the leaders said the incident would eventually affect Oshiomhole negatively while other said it was the high point of Governor Obaseki’s silence in previous political attacks in the state.

Senator Obende Domingo, who was among the guests in the entourage that was attacked, said the action was at variance with the hospitality and good nature common to Edo people.

Domingo said the “sight was not a true representation of Edo hospitality but a clear manifestation of ignorance and total disregard to constituted authority.”

He listed other person in the entourage to include Chairman, Honeywell Group, Oba Otudeko, Mr Kekere Ekun, Otunba Dr Alex Onabanjo, and many other notable dignitaries.

His words: “I was shocked and dazed at what I saw. If this is the hospitality a Party National Chairman can offer his visitors and important dignitaries in our country Nigeria, then our journey can be by far imagined than concluded.”

General Charles Airhiavbere stated that the signals of the attack have been noticed since after the presidential election which the APC lost in Edo.

Airhiavbere said while other states are taking advantage of the border closure to grow rice but Edo State is thriving in thuggery thereby sending away investors.

A former Special Adviser on Political Matters to Oshiomhole, Mr. Charles Idahosa, said the incident has revealed the true character of Oshiomhole to the whole world.

“The whole world is now seeing who Oshiomhole really is. I was his political adviser for eight years. I have been attacking and telling him realistically how things should be done.

“How would you attack a sitting governor? You invited them for lunch at your house, meanwhile, thugs were waiting for them.

“Last week, he came to Benin and lied to the whole world that he was attacked in his compound. No single shred of evidence was put out; it was just in his imagination. This was to portray a sitting governor as a bad person.
“The Commissioner of Police in Edo State said nothing like that happened. He submitted a petition signed personally by him to the Police and they came to Benin to come and carry our people.

“Let me remind our people that I was a political adviser in this state while we were in the opposition and Anenih was the most powerful man in Nigeria as the National Chairman of the Peoples Democratic Party (PDP) and leader of the party.

“He never sent the Police to Edo State to arrest us as members of the opposition. Is it not an irony that now, we are the ruling party at the federal and state levels and they are sending the Police from Abuja to come and pick party members in Edo? I think it is rather unfortunate.”

He continued: “Oshiomhole has shown that he is not a fit and proper person to be a national chairman. Itsey Sagay said last week that trade unionism is not party politics. I don’t think what he is doing is right; it is an embarrassment to this country and to Edo State.”

Edo State chairman of the APC, Barr. Anselm Ojezua, described the event as an unfortunate and disgraceful episode that now puts Oshiomhole in a difficult position.

Ojezua said the hired thugs missed the point by trying to embarrass Obaseki when in actual fact they affected Oshiomhole negatively.
He called on the police of arrest and prosecute the perpetrators.

According to him: “I see it as a very unfortunate incident and I must say that whatever the intent of those boys, I don’t think it is helpful to the National Chairman. It puts him under very difficult circumstances.

“Since the incident took place inside his premises and the governor and other dignitaries were there on his invitation, that puts him under very difficult circumstances.

“It is a very unfortunate situation and shows that the political situation in our party is fast deteriorating and I will call on the national chairman and the governor to review the situation and do the needful because they will have to take responsibility for whatever happens subsequently.”

Edo Speaker Frank Okiye, condemned the incident, noting that it was shameful that such eminent personalities could be humiliated at the residence of the former governor.

According to him: “The incident is saddening. It is regrettable that such eminent persons can be attacked at the home of the national chairman of the APC. We seriously need to find a lasting solution now.”

A former Commissioner for Agriculture, Hon Abdul Oroh, noted that Governor Obaseki was being trailed everywhere by thugs and violence.

“These are self inflicted maladies. He was never psychologically and emotionally ready for political leadership. A man who cannot tolerate opposition or criticism is not fit to lead.

“He should humble himself and reconcile with critical stake holders in the society and the party inEdo State or try APGA. He should spare Edo people this scourge.

“Why did he bring his campaign people to an official event that he knew would be attended by the National Chairman of the party Adams Oshiomhole? Why did the Deputy Governor Philip Shaibu come to the event with bike riders and thugs?

“Why did Obaseki allow Andrew Momodu and Osaigbovo Iyoha who were questioned by the police a few days earlier over the attack on Oshiomhole’s residence in Benin to join them in the bus carrying him, the Oba of Lagos and other eminent citizens to Oshiomhole’s country home?

“That was poor judgement on the part of the Governor. It shows he wanted to humiliate Oshiomhole.It was extremely provocative. The Oba must have been thoroughly embarrassed. Thank God no lives were lost.”
Immediate past Speaker Kabiru Adjoto, condemned the attack and accused of Oshiomhole of being the mastermind of the ugly ordeal.

Adjoto stated that the growing popularity of Governor Obaseki is giving Oshiomhole’s EPM wing of the party sleepless nights, hence the resort to instigating violence.

The former Speaker lamented that the dark forces Edo State was rescued from in 2007, are now hovering around Oshiomhole to mislead him into making costly political misstep of not supporting a performing Governor like Obaseki.

He noted that Comrade Adams Oshiomhole has demonstrated his incapability of managing a political party, as this was evident when APC lost about four states to the opposition.

The former Speaker called on the National Executive Council (NEC) of the party to convey an emergency meeting with a view to calling the National Chairman to order before he completely erode the remaining fortunes of the party.

“You don’t need a soothsayer to tell you that Oshiomhole is behind the attack on the number one citizen of the state and the revered Oba of Lagos who were at his residence”, he said.*

“It is not only shameful but shocking that a National Chairman of a party has made himself a factional political leader in his state by fanning embers of disunity in the party he sworn to strengthen”.

Former Minority Whip of the House of Representatives, Hon Samson Osagie, said the rise in political violence in Edo was encouraged by Governor Obaseki by not condemning previous attacks in the state.

He noted that convocation ceremony was supposed to be a solemn event but was converted to a political rally by Obaseki and Shaibu.

Osagie said the thugs action was an attempt to protect Oshiomhole who was attacked in Bénin last week.

PDP Calls for Immediate Release of its Head of Security, Others in Kogi