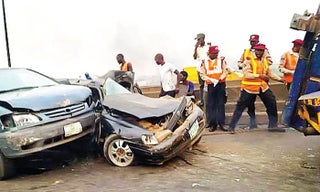 An auto crash on Wednesday was reported to have claimed the lives of an official of the Federal Road Safety Corps, Oyo Sector Command and two other persons.

The accident was said to have involved a Mercedez Benz, Mack truck and a FRSC van.

It was gathered that the accident occurred around Guru Maharaj Ji village in the Ibadan end of the Lagos-Ibadan Expressway.

The incident, according to sources also left many people injured there were claims that the accident was as a result of negligence on the side of FRSC officials on duty.

Sources alleged that the officials were in pursuit of a driver accused of flouting traffic rule.

official of the corps and another unidentified person.

The statement read in part, “The attention of the Federal Road Safety Corps has been drawn to the unfortunate road traffic crash that occurred in Ibadan that claimed the lives of an FRSC staff and one other person who is yet to be identified.

“While investigation is still ongoing, the public is advised to remain calm and peaceful. Meanwhile, first information report at our disposal