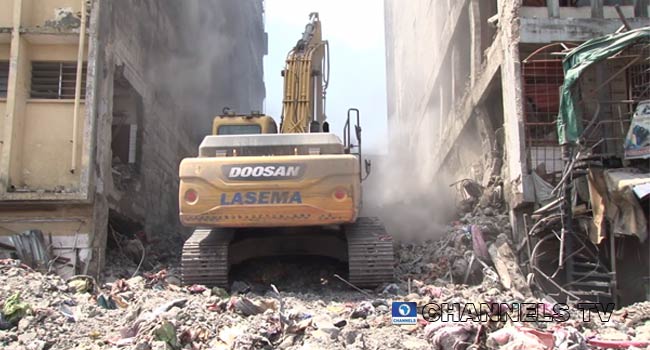 The demolition began after firefighters completely put out the fire on Wednesday morning.

This demolition follows the directive given by Lagos State Governor Babajide Sanwo-Olu during his earlier visit to the scene.

Sanwo-Olu had said the structures beside the detected building will also undergo integrity test to determine its fitness. And to ascertain if they will be demolished as well.

Makeshift shops close to the affected buildings have also be sealed by government agency to allow smooth operation.

The busy Balogun market was met with panic after a fire outbreak at a high rise building located in the market on Tuesday.

The fire which started in the morning destroyed goods worth millions of naira. A police officer was also reportedly killed while on duty at the scene.

The officer died after a section of the burnt building caved in during rescue operation.

Some traders salvaged their goods while others lamented the havoc wreaked by the fire.

I Have Realize My Mistakes, Says El-Rufai