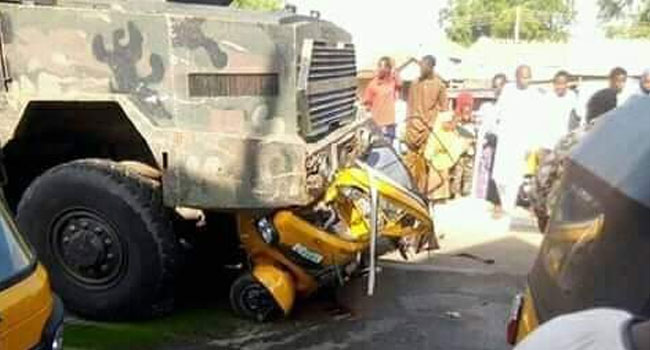 The Nigerian Army has set up a committee to investigate the circumstances that led to the truck accident which killed two persons in Yobe State.

The Assistant Director of Army Public Relations Sector 2, Operation Lafiya Dole, Captain Njoka Irabor, disclosed in a statement made available to reporters on Monday in Damaturu, the state capital.

This comes a day after a military truck has crushed a tricycle rider, killing a 19-year-old student of Federal Polytechnic, Damaturu, and a baby while three others were injured.

Eyewitnesses claimed that the incident occurred as a result of a violation of traffic light either by the truck or the tricycle.

However, acting Commander of Sector 2, Operation Lafiya Dole, Brigadier General Ibrahim Ali, commiserated with the families of the victims.

“The unfortunate accident is highly regrettable, especially that precious lives were lost – a toddler and a female student of the Federal Polytechnic Damaturu lost their lives.

“The sector wishes to use this medium to express our deepest sympathy in this trying time to the families of the deceased and also to wish other victims who are still recuperating in the hospital speedy recovery,” the statement said.

According to it, a delegation from the sector has since paid a condolence visit to the deceased families and those who sustained injuries.

Keep Off, Pipeline Explosion Happening at Isheri, Idimiu Of Lagos