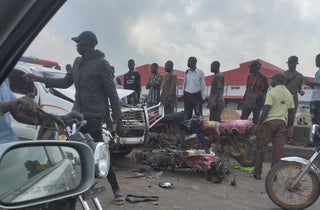 The bus with registration number, KEF 202 XA was said to be coming from the northern part of the country and was driven by one Sheu Mustapha.

According to a source, the driver of the bus was allegedly driving recklessly when his bus hit the old woman and a commercial motorcyclist while the deceased was transacting business in a market in the town.

The source said, “The incident happened on Wednesday which was a market day in the town. The driver lost control of the vehicle and first hit a commercial motorcycle which carried two passengers and later knocked down Mrs Iyaduni Ayodele where she was standing in the market place and she died instantly”.

The source added that the three persons on the motorcycle that was hit by the bus did not die but sustained various degrees of injuries.

Confirming the incident the Police Area Commander for Ikare Akoko, Mr Razak Rauf, disclosed that the vehicle had been impounded and taken to the police station while investigation had commenced into the incident.

He reiterated that motorists needed to reduce their speed limits while in the towns because of school children and markets.