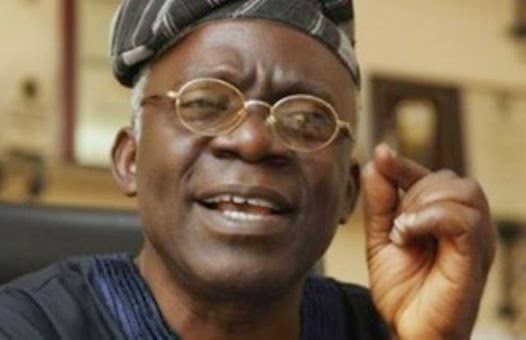 Human Rights lawyer, Femi Falana has said the harassment of the Convener of the #RevolutionNow Movement and Publisher of Sahara Reporters, Omoyele Sowore, was a grand plot to silence Nigerians against criticising the Federal Government.

He also said he is considering several legal actions following the rearrest of his client, Sowore, by the Department of State Service (DSS), saying: “We are not gangsters like those who abducted him.

So we are going to embark on some actions under the law.”

He said Sowore became the target of attack because of his status as a publisher of a widely accepted online medium.

Falana spoke in Lagos on Monday during the launch of the second edition of a compendium on high profile corruption cases organized by the Human Environmental Development Agenda (HEDA Resource Centre) to mark the World Anti-corruption Day.

He insisted that Sowore had not committed any offence which explains why the prosecution had not been able to submit their witnesses’ statement for the commencement of trial.

The human rights lawyer said the introduction of the Hate Speech Bill and Social Media Bill form part of the plot to silence critics of the government.

He likened the Hate Speech Bill to the Law of Sedition introduced by the colonialists to punish perceived dissidents.

Falana said that under the Sedition Law, truth was not a defence as long as the comment annoyed the sitting government.

According to him, this was the case also during the Decree 4 enacted by the Buhari/Idiagbon military regime in 1984.

He insisted that the move to restrict Sowore’s movement was a grand plot against free speech and condemnation of bad policies by the government.

He said: “At a time Sowore is being harassed, we also have the Hate Speech and Anti-Media Bill going on. They are all linked.

The whole idea is to cow Nigerians to submission so that nobody is in a condition to criticize the government.

“Hate speech is a re-enactment of the Sedition Law brought to Nigeria by the colonial regime. When you were charged with Sedition, it was anything that could annoy the government and incite the people against the government whether it was the truth or not.

This is what they mean by Hate Speech. Somebody said, ‘Dogs and Baboons will soak in blood if I don’t win election’, that was not Hate Speech?” Falana charged Nigerians not to leave politics to “professional politicians without ideas” and the corrupt people.

Every Ex-Gov., Officers Jailed Under Buhari are Christians: Is it Only Christians that Steal?-FFK

The Price of Rice will Stabilise Due to Bumper Harvest- Gov. Atiku

One In Four Refugee Children In South Sudan Are Malnourished

One In Four Refugee Children In South Sudan Are Malnourished