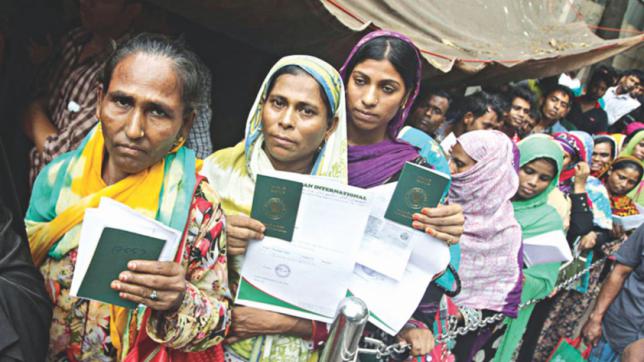 At least 55 Bangladeshi migrant workers were smuggled to Algeria, a North African country and nine of them returned to Bangladesh facing ordeals in destination country.

On return, the victims said that they were tortured, denied wages and food at shabby accommodations they were put up.

Brokers in Dhaka of Bangladesh arranged migration of the youths to Algeria with promises of highly-paid jobs, standard works and easy entrance to Spain.

They were sent to Algeria on tourist visa by the brokers who betrayed them after taking them to the North African country.

There were many workers from Bangladesh remaining trapped and living in inhuman conditions in Algeria, Morocco and other neighboring countries, said the returnees.

According to BRAC Migration Centre, NGO of Bangladesh, some ill-fated Bangladeshis sought help though video messages to arrange their safe return to the country. For rescue of the tapped workers, BRAC appealed to the Bangladesh government.

Recently, nine Bangladeshis have returned home from Algeria while four remained stranded in Morocco on their way to Spain, and 42 are living in Algeria in inhumane conditions.

Wage Earners Welfare Board deputy director Zahid Anwar told this correspondent that they had received the applications seeking repatriation and that the applications had been forwarded to the Bangladesh embassy in Algiers for action.

Banna Bijoy Overseas sent Suman, Delwar, Mohasin, Helal and Alamgir of Munsiganj charged each of them Tk 3.05 lakh with the promise of providing them with jobs on monthly wages varying between Tk 44,000 and Tk 50,000.

On arrival in Algeria they found jobs but were not paid their wages regularly and at one stage were forced to migrate to Spain via Morocco, the victims informed their families in their letters.

Singapore Skill Training Centre based in Subchani Bazar, Tongibari, Munsiganj of Bangladesh was also involved with smuggling the 55 victims to Algeria, according to official document.

On return, Jasim of Munsiganj Sadar narrated that he paid Tk 3.05 lakh to Singapore Skill Training Centre to migrate to Algeria.

He said that he was paid Tk 44,000 as the wage of three months as a construction worker.

He said on August 27 he and the eight others came back to Bangladesh and their air fares were paid by their families.

Quoting Bangladesh ministry of Expatriates’ Welfare and Overseas Employment joint secretary for employment Jahangir Alam, the newspaper reported that Bangladeshi male and female apparel workers would get jobs in factories owned by Turkish and Algerians.

Bangladesh Ambassador in Algiers visited the factories and was satisfied over the job opportunities on offer, the official said.

He said that the workers would be trained in Bangladesh before sending them to Algeria through recruiting agencies.

He said that the sending recruiting agency would be allowed to charge Tk 1.5 lakh as the migration cost from each workers. Each worker would be paid the monthly wage of Tk 40,000, he said.

Algeria recruited 332 Bangladeshi workers in 2018, according to the Bureau of Manpower, Employment and Training.