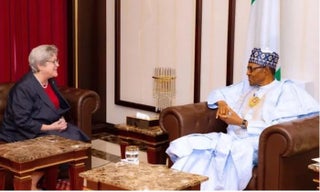 Newly-posted United States Ambassador to Nigeria, Ms Mary Leonard, said on Tuesday that her country placed Nigeria on its watch list due to the humanitarian situation in the country.

She stated that the United States Government took the action as part of its efforts to deepen conversation on the issue.

Leonard spoke in Abuja when she visited the Presidential Villa to present her Letters of Credence to the Nigerian President, Major General Muhammadu Buhari (retd.).

A statement by Buhari’s media aide, Mr. Garba Shehu, after the meeting, reads in part, “In her remarks, the United States Ambassador said Nigeria was listed on a watch list to deepen conversation on the humanitarian situation in the country, accepting that some people could flare the flames and crystalise issues that could affect peaceful-coexistence.”

The statement quoted her as responding, “There are people who make things less attractive than they seem.”

It said she further noted that “The report (on Nigeria) will deepen conversation of the situation in the country, especially with religious leaders and mediators.”

The ambassador also told General Buhari that the US “recognises and celebrates the integration in Nigeria,” adding that her country would “always side with transparent processes.”

She said she was happy to be in Nigeria and would spend time promoting efforts at addressing the humanitarian challenges in the country.