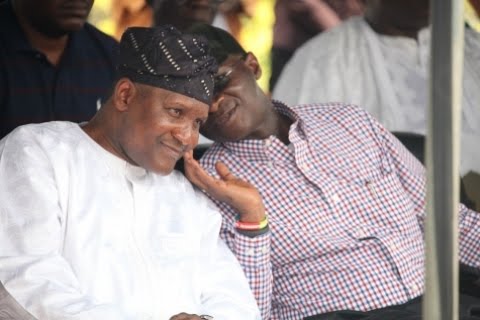 Group President/CE of Dangote, Aliko Dangote has said that the Apapa/Oshodi expressway would be completed before December 2020.

Dangote stated this while conducting the Minister of Works and Housing, Babatunde Fashola on an inspection tour of the 35-kilometer Apapa-Oshodi-Oworonsoki-Ojota highway currently under construction by Dangote Industries Limited.

Dangote said:  “What I can also assure you is that this road will be finished before the end of next year.’’

According to him, the work began in 2018, as part of a bargain between the company and the Federal Government to enjoy a 10-year tax rebate that accrues to N72.9 Billion.

The road has been subject of heavy traffic flow. An initial attempt to work on the road fell apart, it was approved for N15 Billion in 2013, work on the road stopped after the 2015 general elections.

President/CE, Dangote Industries Limited, Aliko Dangote during the inspection said:
“We expect that by the end of 2020, the entire road network will be finished, you will have a road that will last for 40 years.”

Speaking on Dangote Industries Limited’s struggles, Dangote complained about the congestions at the ports, the gridlock which cost the company about N25 billion in revenue between 2017 and 2019 financial year.

Praising the quality of the road been constructed, Dangote assured that it will revive commerce around the Apapa area.  “This road will actually open up the economy. It will bring a lot of jobs and a lot of factories that have moved out will be able to move back.”

The road is on track to be concluded before the end of 2020. This is the first attempt to rehabilitate the busy road since it was first completed in 1978. Fashola also spoke about the economic revival of the Apapa area,

“Businesses have started coming back on Liverpool Road because the road closed earlier is now back. You will see more of that.  All of the businesses that are shut on Creek Road will come back. We expect to see property redevelopment and property renewal once the road is completed.”

Fashola also explained that the project will be creating wealth around the surrounding areas as trucks will be needed to convey different materials to the site of the construction, and also labor to help with the process. The project has also seen over 600 people directly employed.

Speaking of how President Buhari plans to bring 100million people out of poverty, Fashola explains that the economy around the construction will provide jobs and opportunities for Nigerians.

“Once the economy of Apapa returns, all the clearing and forwarding, shipping, newspaper companies and all others doing business will resume fully and the economy will bounce back.’’

He lauded the private/public partnership scheme with Dangote and pointed out that section two of the project, which was not part of the original contract was already showing signs of failure, due to heavy traffic.

While inspecting the road around the Oshodi area, Fashola had this to say

“We are at the Oshodi area now and one side has been concluded and opened to traffic and this is how we intend to continue to complete and open until we finish the entire road,”

During the inspection, Fashola told members of the press, “The Federal Government is dedicated to the speedy completion of the highway to provide a lasting solution to the problems of bad roads, and gridlocks”

Previous efforts by both Federal and State governments to solve this bottleneck have been unsuccessful.