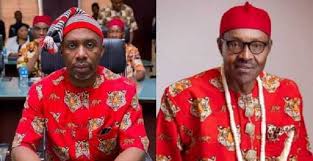 Uche Nwosu, the former governorship candidate of the Action Alliance (AA) in the 2019 election in Imo State, has said that All Progressive Congress APC won’t be seeking to retain power in 2023 on power Of incumbency.

He said the achievements of President Muhammadu Buhari will enthrone his successor in 2023 without relying on the so-called power of incumbency.

Nwosu, who recently returned to the All Progressives Congress (APC) after a Supreme Court judgment that declared him the authentic governorship candidate of the party (APC) for the 2019 election, said Buhari’s performance will give whoever gets the party’s nod to fly the presidential ticket comparative advantage over other contenders.

According to him, APC won’t be seeking to retain power in 2023 on the plank of power of incumbency but will ride on the sterling performance of the President.

He pointed out the President’s legacies in the agricultural sector, anti-corruption crusade, security and the rejuvenation of the economy will earn the party victory.

Nwosu, however, knocked the leadership of the party for not doing enough to sell the President’s achievements to Nigerians but is rather locked in an endless battle for pecuniary gains.

He said: “The party’s leadership has not projected what President Buhari has done, the party is busy fighting each other, it is not for President Buhari to be shouting about his achievements, it is the duty of the foot soldiers and that is the party.

“Take for instance the issue of the rice revolution, before now nobody knows that Ebonyi can produce rice at commercial quantity.

“The party has not done well in telling the people what President Buhari has done since he came on board, they are just busy fighting and this cannot help us”.

On why he decided to return to the APC after the perceived injustice he suffered during the governorship primaries, Nwosu said: “twice the APC governorship primary was conducted and I won in all, the elections were monitored by INEC and in their report, I was listed as the winner but the National Chairman of the party, Adams Oshiomhole, denied me the candidacy of the party and submitted the name of a man that did not even contest for the primaries.

“But the recent judgment of the Supreme Court has confirmed that I was the candidate of the party but I have decided to put all that behind me and moved on.

“I have forgiven Oshiomhole of all he has done to me, it is time to focus on rebuilding the APC in Imo state and the Southeast.

“I will remain grateful to President Buhari for standing behind me through the period because he knew what happened and didn’t take sides with Oshiomhole but urged Imolites to vote according to their conscience, it is only a man that is given to fairness and justice that can do such.”

Osun Records 30 Cases Of Fire Outbreaks In One Week