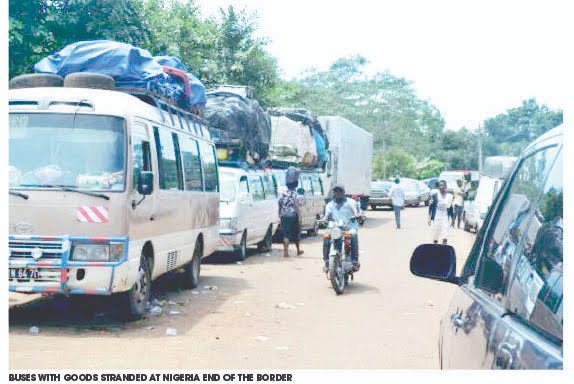 Ajibola also decried that other border communities are facing untold hardship after the border closures.

Mr Ajibola equally alleged extortion of residents by those she termed ‘bad eggs’ among the operatives Joint Task Force operatives in charge of border control.

Speaking with newsmen in Abeokuta, the legislator expressed concern that some locally made goods bought by her constituents and being transported down to Idiroko and other communities were confiscated by the operatives.

Ajibola who was elected under the platform of Allied Peoples’ Movement (APM), said traffic logjam has been created on a narrow bridge at Yewa River, Ajilete due to “unnecessary checks” by the operatives.

According to her, the bridge may collapse any moment from now due to the retainment of heavy goods on the bridge rather than the free – the flow of vehicular movement.

The lawmaker wondered why “Out of numerous border communities in Nigeria only residents Ipokia LGA and its environs are treated with disdain.”

“The prices of consumer goods have skyrocketed in Idiroko and her environs. Also, there has been heavy traffic logjam on the narrow bridge on Yewa River at Ajilete and the bridge may collapse anytime from now because it is meant for the flow of loads and not retainment of such.

“During the yuletide, citizens traveling to celebrate Christmas and the New Year with their families are extorted by the bad eggs of the JTF and consumer goods which include perishable ones like fish were seized.

I want to add that seized trucks packed on the narrow Sango to Idiroko border road are posing a dangerous threat to lives of commuters,” Ajibola said.

She, however, called on Governor Dapo Abiodun to wade into the matter with a view to alleviating the suffering of the communities.

Speaking in this regard, the Spokesperson of the Nigeria Customs Service (NCS), Ogun Area Command I, Abdullahi Maiwada asked the lawmaker to intimate the command with specific issues of alleged extortion, saying the command would investigate and mete out sanctions to officers found culpable.

Maiwada explained that the traffic logjam on the Ajilete bridge was due to an increased number of vehicles along the routes, adding that the operatives could not afford to check the vehicles which are mostly used to transport smuggled petroleum products.

He added that the joint task force has done “everything humanly possible to control the traffic.”

“Go and check and evaluate, seven out of ten vehicles on the road are reconstructed vehicles usually being used to carrying rice and fuel with the intention to smuggle those products out of the country.

“By the time you have a high volume of those vehicles going to and from, buying and offloading fuel, there are bound to be checked.

So, it is our duty to check to smuggle and enforce,” Maiwada said.

FG Urged To Include Dyslexia In Curriculum, As 90% Of Teachers Are Ignorant

FG Set To Withdraw Troops From Parts of Nigeria In 2020