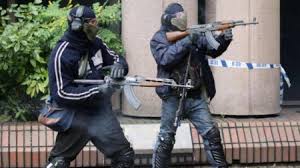 A gang of armed robbers, Monday evening, stormed popular IBB market in Suleja town of Niger state, shooting one person in the process.

Daily Trust reports this morning that, the robbers who arrived in the area some minutes before 7 pm parked their vehicle from behind and went straight into a mobile phone’s shop, located inside a plaza known as Murada.

“No one is aware of what was taking place inside the shop as they carried out everything secretly, a source informed.

It was gathered that in the process to flee the area, the robbers missed their exit. “They shot into the air which caused commotion where one person among the passers-by was hit.

A member of the Suleja vigilante group who said they are yet to report for night duty there when the incident took place. He added that the robbers later located their vehicle, and fled the area, while the victim was conveyed to the Suleja general hospital for treatment.

Immediate Past Gov Sold 110 Properties, Including My Deputy’s – Kwara Gov