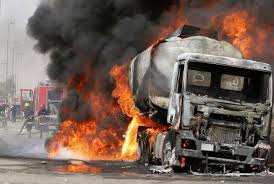 scores were fear dead on Tuesday when a Tanker lading with PMS exploded in Benue State.

Several people were feared dead on Tuesday in Agudo village of Tarka Local Government Area of Benue State when a petrol tanker exploded.

According to a native who simply identified himself as Tyorsase, the explosion affected many houses.

It was gathered that the petrol tanker which was heading to Gboko tried to wade through a burning bush when it exploded, causing serious damage in the village.

Tyorsase said, “A petrol tanker tried to wade from burning bush exploded suddenly. Some villagers who were keeping vigil at catching rats were caught up in the fire.”

Although bush burning in the state, particularly in Tiv land is a norm, especially during the dry season when people chase rats.

Meanwhile, the Sector Commander of Federal Road Safety Corps, Aliyu Baba, confirmed the tanker explosion but said there was no casualty, adding that he had sent a rescue team to the scene of the incident. He promised to get back with an update.

Also, the state police command’s Public Relations Officer, DSP Catherine Anene said, “The incident at Takar happened but no casualties. It was a lone accident of a tanker. The police is in control of the area as we speak.”