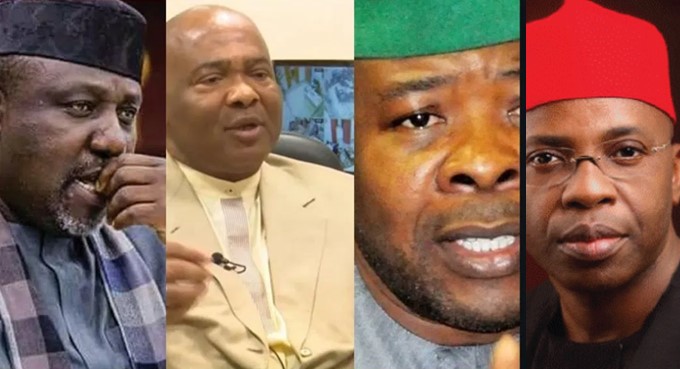 Immediate past governors of Imo State  Rochas Okorocha and Emeka Ihedioha have said they are unperturbed if Governor Hope Uzodinma resolves to probe their financial activities from 2010 till date.

Former Governors Ikedi Ohakim, Okorocha and Ihedioha were in charge of the state during the period.

Recall that Uzodinma had, in his inaugural speech said, “I hereby direct the Accountant-General of the state to, within four days, forward to me the comprehensive financial status of the state from May 2010 till date.

“I also direct the permanent secretaries of all the ministries to, within the same period, forward the status of the contracts awarded within the time frame. Payment of all ongoing contracts is hereby stopped.”

But Ihedioha on Thursday said he did not misappropriate the state’s funds while in the office between May 29, 2019, and January 14, 2020.

Ihedioha in a tweet said:  “Let me reiterate that I have nothing against being probed. What I did not agree with was the attempt to misuse power to harass and intimidate me or any of my supporters.”

Okorocha also dispelled the speculation that he was having a serious political battle with Uzodinma.

Okorocha spokesperson, Sam Onwuemeodo told Punch that the political disagreement he had with Uzodinma ahead of the All Progressives Congress’ governorship primary election in the state in 2018 did not resort to a quarrel.

Okorocha said Uzodinma is his brother and party man, adding that whatever disagreement he had with Uzodinma remained “politics.”