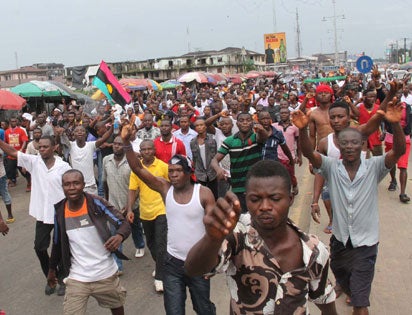 Many Peoples Democratic Party,  faithful on Sunday engaged in a peaceful march in Imo and the Abia States to protest the judgement of the Supreme Court that evicted Emeka Ihedioha as governor of the Imo State

PDP, members across protesting states wore black attire to express their displeasure with the Supreme Court’s Rulings that removed as Imo governor.

In Imo State, the PDP protesters marched from the Okigwe road party secretariat to the front of the Imo government house and returned back to the secretariat.

They lambasted the Chief Justice of Nigeria, CJN, for miscarriage of justice that sacked Emeka Ihedioha of the PDP and replaced him with Hope Uzodinma of the ruling All Progressive Party, APC.

“We are not happy, return back Ihedioha. This is an injustice to us and we will not accept this. You must do the right thing. Imo people are not happy, the protesters stated.ey would embark on a protest to express their dissatisfaction with the stand of the supreme court.”

In Abia State, the protesting situation was similar.

The PDP in Abia State requested the Supreme Court to reverse its January 14, 2020 judgment that sacked Emeka Ihedioha from office and declared Senator Hope Uzodinma, as the elected governor of Imo state.

The protesters who described the Judgment as an attempt to destroy democracy noted that they believe the Supreme Court can reverse the erroneous verdict for the sake of posterity.

Chairman of Abia PDP, Chief Johnson Onuigbo in Umuahia, explained that the PDP national office had mandated state chapters of the party to organise demonstrations to register their disgust at the pronouncement of the apex court.

They marched through Ikot Ekpene, School and Bende roads to the PDP secretariat at St. Finbarrs road,  displaying placards with various inscriptions.

read; “We cherish democracy passionately, judiciary, please don’t truncate it” Can a government that doesn’t obey the rule of law allow justice to thrive?”,