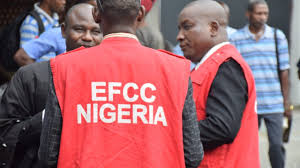 Economic and Financial Crimes Commission (EFCC) in Makurdi at the weekend arrested the Clerk of the Benue State House of Assembly, Torese Agena, over alleged involvement in N220million fraud.

EFCC also at the weekend confirmed that Torese Agena is in their custody over his alleged involvement in the fraud.

The anti-graft commission said that the family of Agena comprises wife and two daughters, stormed its office on Friday morning and assaulted several of its officials on their duty post.

Head of Information and Communication of the EFCC in Makurdi, Nwanyinma Okeanu, in a statement made available to newsmen in Makurdi, explained that Agena is being investigated for an alleged case of fraud, stealing and misappropriation of public funds to the tune of over N220million.

Okeanu said that Agena, wife, and children were invited to the EFCC zonal office in Makurdi at about 10:00 am on Friday where he is being held.

Mr Okeanu said: “The wife – Mrs. Agena Terngu and her daughters, Terfa – Mamadu Ngweavese and Agena Suur assaulted two mobile policemen on duty while giving the third a human bite on his left arm and tried to run down another with their car while trying to escape.

“The suspect, Torese Agena, is currently the Clerk of the Benue State House of Assembly and is currently in detention on a valid remand warrant obtained from the Federal High Court, Makurdi,” the statement reads in part.

Okeanu said that the suspect’s wife, as well as his two daughters who carried out the assault, were handed over to the police for onward prosecution while the main suspect – Torese Agena, is being processed to be arraigned for prosecution as soon as investigations are concluded.

When contacted, the Police Public Relations Officer for Benue Command, Catherine Anene, said she was not aware of the matter and cannot confirm which of the units under the command kept the women who were alleged to have carried out the assault on the EFCC’s officials.