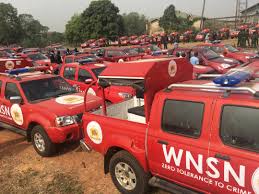 Amotekun faithfuls are presently protesting in Lagos and Osun simultaneously to press home their demand that the southwest security outfit has come to stay.

This is just as the protesters are expected to replicate the same in Ogun, Oyo, Ondo and Ekiti states.

On Tuesday as early as 6:30 am,  members of the Yoruba socio-cultural group, the Odua Peoples’ Congress (OPC) as well as those from the Yoruba World Congress (YWC) and the supporters of Amotekun, a security outfit organized by the South-West Governors, have stormed Ojota in a peaceful protest.