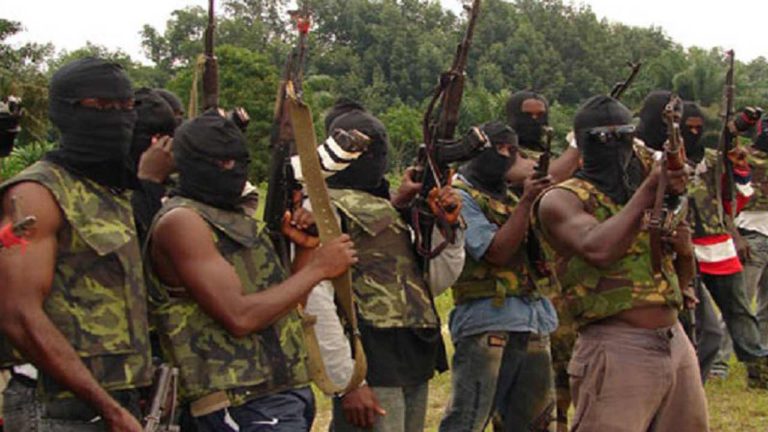 It was alleged that the Nigerian Army last Friday burnt Bilabiri 1 and 2 communities while soldiers were searching for criminals that killed three military personnel.

The group in a statement by the national president, Mr Austin Ozobo, threatened to shut down oil facilities in Niger Delta If the government fails to rebuild the communities in 30 days.

It urged the government to investigate the atrocities committed by the soldiers and bring the culprits to book, as hundreds of villagers have been displaced by their unguarded act.

Group words: “We have been disgusted and infuriated over the unlawful military invasion of Bilabiri communities.

”We condemn it in its entirety as it is barbaric, senseless and unlawful.

“We (Ijaws) have been pushed to the wall and we have decided to call for a total shutdown of all oil facilities in Niger Delta to protest against the continued unlawful burning of Ijaw communities if Federal Government fails to rebuild Bilabiri 1 and 2 within 30 days.

“The killing of three military Officers was outrightly condemned by the Ijaw nation. But that seems not enough to pacify and conciliate the marauding, bias and sectional military officers in Nigeria.

“Despite the massive condemnation of the attack, the military went ahead to burn down two Ijaw -speaking communities on mere suspicion that some youths from those communities could be part of the gunmen, who killed three military personnel and abducted four expatriates.

“The law of presumption of innocence has been violated. The law says every accused person (s) is or are presumed innocent except proven guilty by a competent court of jurisdiction.

”Now which court actually told the sectional military that people they are suspecting are guilty of the crime before burning down the innocent communities?

” This is an act of lawlessness and complete abuse of rights of residents of the innocent communities.

”The people’s right to life, right to personal liberty, right to a fair hearing and presumption of innocence have been violated.”

“The killing of three military officers and abduction four expatriates were never planned by the entire two communities, and the action did not take place in Bilabiri 1 and 2 communities to warrant being burnt down unlawfully.

”The king’s palace was burnt down. If it were in the North, would they burn the palace of an emir because of one useless criminal? “This is a deliberate attempt to wipe out the existence of Ijaws in Nigeria.

”Our benevolence has been taken for granted, being the strength of the country’s economy. Killing, burning and invading of Ijaw communities is a coup against the Ijaw nation and it is unacceptable.

“In as much as we do not support the killing of military personnel under any guise, we want to state unequivocally that more military men died in the volatile North than Southern Nigeria.

”But despite the massive killings Of military personnel In the North, no Northern community has been burnt down.

”On 18th December 2019, two custom Officers were killed in Lokoja/Okene road but the government has not deemed it fit to burn down the two cities.

“Furthermore, on January 15, 2020, two soldiers were killed by bandits at Okene, up till now Okene has not been burnt down.

”On July 11, 2019, 12 soldiers got missing and 10 killed in Damboa in Borno by suspected Boko Haram attack, but up till now, Damboa has not been burnt down.

“One soldier was killed in Rigasa area of Kaduna on January 16, 2020, but Rigasa has not been burnt down.

”On March 22, 2018, 12 soldiers were killed in Kaduna, the military is yet to burn down Kaduna. On Friday 11,2019, 13 soldiers killed by Boko Haram were given mass burial in Kaduna, but Kaduna is yet to be burnt down.

”January 9, 2020, about 8 soldiers were killed in Monguno town in Maiduguri but Monguno is yet to be burnt down.

“On November 22, 2018, about 100 soldiers were killed in a Metele village attack, but since then, the military has not burnt down Metele village in eastern Borno state and failed to compel the community to produce the identity of the attackers and many more.

“We are now an endangered species. We are on the verge of being wiped out. We are disappointed over the unlawful invasion and burning of Bilabiri communities.

“There is no town or city in Nigeria that does not harbour criminals, but none of such cities had been burnt down despite several criminal attacks on military personnel.

Election Is Good When You Win, Bad When You Lose – Buhari