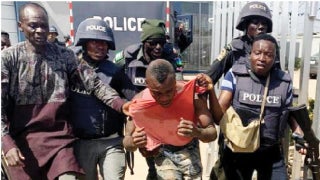 ”I started stealing as a petty thief in the neighbourhood but letter graduated to stealing in the bank, said Ehuiwe Akire,  a 35-year-year old armed robbery suspect, Ehuiwe Akire.

He was arrested by operatives of the Inspector-General of Police Intelligence Response Team ( IRT ).

Sources described Akire as the leader of a six-man armed robbery gang which he was said to have brokered when he came back from prison.

The gang, according to the sources, specialized in robbing bank customers who had gone to their banks to withdraw huge sums. They also specialized in snatching handbags, phones and cash from passengers on the highways who were going on or returning from distant journeys with huge sums in their travelling bags.

The gang leader, who said he grew up in Ajegunle, Lagos State, confessed that his gang was the one terrorizing areas like Apapa, Festac, Mushin and Surulere in Lagos State before he was arrested.

He also claimed that his gang was robbing beer parlour customers and people who go to cyber cafes to do one transaction or the other by collecting their phones, money and other valuables.

The suspected gang leader, who allegedly operated with two Beretta pistols, however, denied ever killing any of the gang’s victims with pistols or any gun carried by any of his gang members, stressing that the guns were only meant to intimidate their victims so they would quickly comply with their instructions.

Explaining how the suspected gang leader was arrested, an IRT source said he was arrested on January 16, 2020 along Isheri-Igando road when they wanted to start an operation at about 4:30 pm. The commander of IRT, Abba Kyari, a Deputy Commissioner of Police, was said to have received an intelligence report to the effect that the gang, which had been on the wanted list of the police, had planned to rob some bank customers.

Kyari reportedly sent his special squad, led by the Southwest coordinator, Phillip Rieninwa, a Chief Superintendent of Police, to get the robbers arrested.

While Akire and five of his armed members were around Isheri-Igando Road on three motorcycles, they accosted the IRT operatives and tried to shoot the detectives, but their gang leader was overpowered, disarmed and arrested. The remaining five members of the gang, however, narrowly escaped.

The detectives also recovered the two pistols and two charms from the body of the suspect.

In his confession, Akire said: “I am an Ishan man from Iruwa. But my mother is from Uromi. I stopped school in Primary Six.

“I trained as a bricklayer but I was not making enough money. When all the efforts I made to get enough money to stand on my own failed, I started stealing.

“At times, while shop owners were sleeping, I would sneak into their shops and collect steal handsets, money and anything of value. I was making big money but I could not save a dime.

“I became a womaniser and started carrying women to hotels where I lived recklessly.

“I am married with a daughter, but we are not living together. My wife left me when she discovered that I was a common thief.

“This separation from my wife made me to start thinking of going into criminal activities that could fetch me more money.

“The opportunity came when I was arrested by the police in Adeniji Adele and I was charged to court. In prison, the hardened inmates taught me how to rob to get big money.

“I was also arrested by the operatives of the Lagos State police Command’s Special Anti-Robbery Squad (SARS), and in one of the arrests I was charged to court and sent to prison.

“It was in prison that I met an inmate named Festus who lured me into armed robbery. The case I had in Adeniji Adele which also took me to prison was a case of receiving and buying stolen goods which I used to sell at Alaba Market.

“But let me tell you the truth: it was my joining a cult that hardened me and gave me the courage to carry a gun and operate with it. When I joined the Eiye cult, they ordered me to buy two guns for them. It was after buying the two guns that I bought my own guns which I used in bank operations.

We are a six-man armed robbery gang, and the members are Festus, Obilo, Lastborn, Segun, Shedra and myself.

“We used motorcycles to operate. At times, we pretend to be commercial motorcycle riders and hang around banks to rob bank customers who had gone to the bank to withdraw huge sums of money.

“At times, some of the bank customers who are in a hurry would flag down one of our gang members, who would then take them to where they would be dispossessed of all the money they had withdrawn from the bank.

“We operated in Apapa, Festac, Mushing and Surulere.

“It was Obilo who introduced me into shop breaking. If we wanted to rob in the bank, Festus would pretend as if he wanted to withdraw money. He would enter the bank hall and start monitoring a person who had come to withdraw a huge amount of money.

“The rest of us would stay outside, watching when Festus would come out of the bank hall.

“Once the target had withdrawn money and started to come out, Festus would follow very closely. The moment the victim comes out, Festus will signal to the gang members outside by pointing at the victim for them to identify him or her.

“When the victim entered a taxi or a commercial motorcycle popularly called okada, our members outside the bank, who were already on their bikes, would start trailing the victim until he got to the point where he would work on the victim and collect the money he withdrew from bank. It is as simple as ABC.”

Akire said he came to Lagos in 2005 and stayed in Ajegunle.

He said: “I was introduced into breaking and entering work by Obilo when we met in Ilesha Prison in Osun State. If we wanted to rob somebody, we would use the slang understood only by criminals.

“Obilo resides at Festac, but there was a time he told us that he would travel abroad.

“It was Festus who brought the first girl we robbed, because he knew her very well.”

Asked how many gangs or groups he had operated with, Akire said three. But he said he had never fired a victim since he went into armed robber.

He said: “I like holding two pistols just to play big the boy.

“When I started robbery, they used to bench me because we didn’t have guns. Possession of a gun puts one in a higher class, and he is respected because of the gun, which we call authority.”

He said the charms he used were meant to make him invisible. He also said he was into smuggling before he went into armed robbery, hence if he was carrying contraband goods, the customs men would not be able to see him or get him. And if the police were looking for him, they would not be able to arrest him.

“I have vowed to God that if I regain my freedom I will not take anything that belongs to my fellow human being by force again. I will not rob again,” he said.

On how much he had made from armed robbery, he said his lifestyle did not allow him to save money because he slept in hotels, stayed in beer parlours, patronized prostitutes and paid for hotel accommodation daily. He said he also drank a lot of beer and smoked Indian hemp.

He said: “At times, we would go to other states to operate when security in Lagos is tight.

“We used to go to Cotonou (Benin Republic) to rob or hide. If we wanted to go into hiding, Cotonou is the first choice.

“I bought two parcels of land in the bush for N250,000 each. The person who bought them for me cheated me because I later went there to verify and discovered that the land was sold to him for N150,000 each.

According to police sources efforts were in advanced stage to fish out other members of the gang.