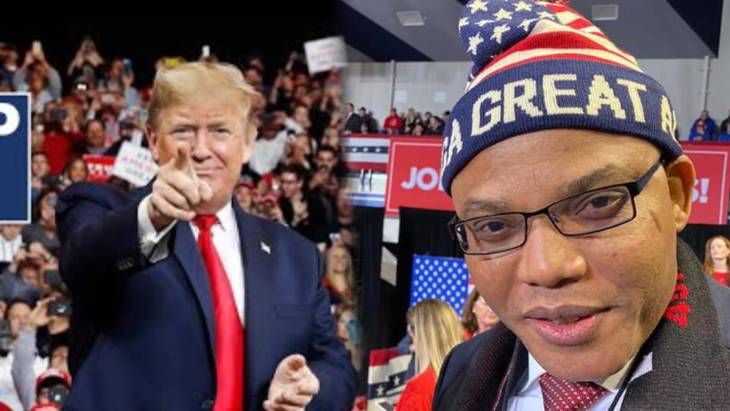 The indigenous people of Biafra (IPOB) has on Saturday, commended the leadership of the US Republicans Party in Iowa for extending a VIP invitation to their leader, Mazi Nnamdi Kanu to Trump’s campaign rally at Des Moines Iowa.

The group said Kanu was a special guest at the rally on Thursday, January 30, 2020.

Kanu’ In a statement on Saturday by its Media and Publicity Secretary, Emma Powerful said it was ironical having a leader of a group labelled as a terrorist by its government as an important personality in an event attended by the President of the United States of America.

The group reassured the people of Biafra of its commitment to actualizing the republic of Biafra in collaboration with the most powerful countries in the world.

The statement reads in part: “We the global family of the Indigenous People of Biafra (IPOB) wish to appreciate the leadership of the US Republicans Party in Iowa for their invitation to our great leader Mazi Nnamdi Kanu as a special guest at Trump campaign rally on Des Moines Iowa on Thursday, January 30, 2020.

“Our leader was granted entry to the VIP section of the arena reserved for the top echelon of the Republican Party in the state including the Iowa State Governor Kim Reynolds whom he met briefly.

“It is ironic that a man injuriously labelled a terrorist by a biased, corrupt, discredited and dysfunctional judiciary in Nigeria is being accorded VIP status in an event attended by the president of the United States of America whereas Nigeria has been placed on a list of terror ravaged countries banned from entering the US.

What this proves is that rulers of Nigeria are the real terrorists. “Our leader Mazi Nnamdi Kanu and the Directorate of State of the Indigenous People of Biafra (DOS) are working very hard and round the clock with stakeholders and most powerful countries in the world to ensure that Biafra is restored peacefully and as soon as possible.

“We are calling on every Biafran both at home and abroad, particularly the IPOB family worldwide, to remain strong and determined because we are nearly there.

“No mortal born of a woman can stop Biafra from coming or the freedom that will bring for all other trapped nationalities in Nigeria. “Our freedom is ordained from the most high God in heaven.

The success of our ongoing global engagement and diplomatic strangulation of Nigeria will set all captives free.”