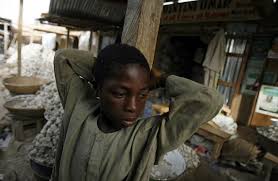 This is sad but true.
A man in Kano went to a foodseller because he had not eaten in three days.

He begged the seller for food on credit but the foodseller said no because he already gave food to too many people on credit.

The man sat down beside the foodseller’s shop as he had nowhere else to go.

The foodseller told him he’s very sorry and he would like to help but too many people in the neighbourhood have collected food on credit and his business is sinking.

The man sat there and said nothing.

As time went on, other people came into the shop to buy foodstuff and went out- they noticed the man at the door sitting there sleeping. But nobody bothered.

Until one man came later in the day and asked the foodseller: “who is the man sitting at your door?” “Why is he there?”

Then the foodseller said, “oh it’s a man who says he has not eaten for three days and he wants to collect food on credit but I could not give him because my business is struggling from all the credit I have already given out”.

READ ALSO:Story That Touch: ‘How I Loss My Spouse To Lack of Forgiveness’

Then the other man said: “How much is the food he wants?”

The food seller said “It’s a few cups of garri, rice and beans. Everything may be 2,000 naira”.

The other man said “Alright pack everything he wants and more. I would pay for it. Let him go home to his family and eat”.

The foodseller packed all the food and went outside to tell the man with joy that someone has paid for his food.

He saw the man still sleeping.
He tapped him to wake him up, he didn’t respond. Tapped him again, nothing.

The man had died.
He died sitting and waiting for help.

This happened just a few days ago in Badawa, Kano. Some people who live in that area know this story.

The man was dead all along while people were coming in and out of the shop thinking he was sleeping.

He died a hopeless man. He died helplessly. He died a man whose country failed him.

If you know anyone in this period who is hungry around you and you can afford a little food or money to give him/her, please do.

Many people are walking the streets with an empty stomach, a sorry face and are dead within. It’s only a matter of time before they physically die.

Don’t be the one who walks into a store and doesn’t bother to ask about the beggar at the door.

We all have our problems yes but our little curiosity may save a life.