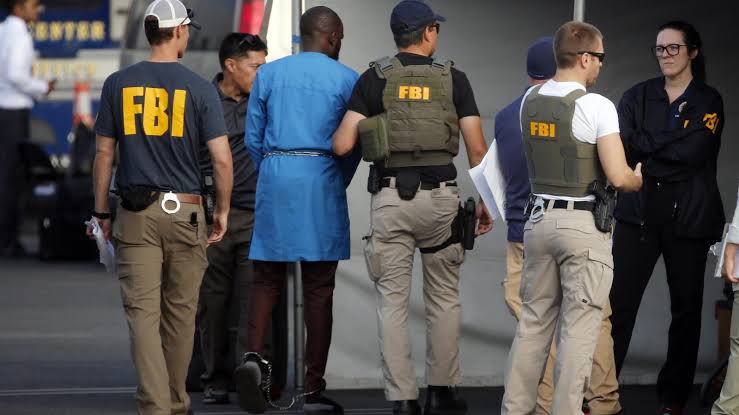 Five Nigeriab Fraudsters on the Federal Bureau of Investigation, want list have been arrested by the Economic and Financial Crimes Commission.

The alleged fraudsters include, Fekix Okpoh, who was arrested alongside Richard Uzuh, Alex Ogunshakin, Abiola Kayode, and Nnamdi Benson.

They had been declared wanted by the FBI sometime in 2019 for their alleged involvement in a Business Email Compromise scheme that defrauded over 70 businesses in the United States, of over $6 million.

The suspect allegedly provided over 40 bank accounts to his conspirators, which were used to receive fraudulent wire transfers from their victims totalling over $1m.

He was, on August 21, 2019, indicted in a US District Court, District of Nebraska, on charges of conspiracy to commit wire fraud.

However, Okpoh, on Friday, turned himself in at the Lagos Zonal Office of the commission in company with his parents, Col. Garuba Okpoh(retd.) and Chief Justina Okpoh.

The Head, Media and Publicity, EFCC, Wilson Uwujaren, in a statement in Abuja on Tuesday, said during interrogation, Felix said he surrendered to the commission “out of the respect he had for his parents and his resolve to be morally upright.”

The statement titled, ‘$6m Internet scam: Suspect on FBI list turns himself in,’ read in part, “The Economic and Financial Crimes Commission has commenced an investigation of one Felix Osilama Okpoh, an alleged fraudster on the watchlist of the Federal Bureau of Investigations, for his involvement in a $6m internet fraud.”

Meanwhile, the EFCC Gombe Zonal Office is interrogating one Eze Ugochukwu, a student of Computer Science, Bauchi State Polytechnic, who allegedly defrauded unsuspecting members of the public by posing as a Lieutenant in the Nigerian Army.

Ugochukwu, an indigene of Nsukka Local Government Area of Enugu State was arrested by the officers of 33 Artillery Brigade of the Nigerian Army, Shadawanka Barracks, Bauchi State and handed over to the EFCC for further investigation and possible prosecution.

This was a sequel to a complaint lodged by one Mrs Dorcas Oni that the suspect posed as a Lieutenant in Nigerian Army and promised to secure admission for her son into the Nigerian Defence Academy. She reportedly transferred N400, 000 to his account.

In the course of EFCC’s investigation, it was discovered that the suspect has defrauded some other victims to the tune of N1, 455,000, using the same bait.

A statement from the EFCC said the proceeds of crime were paid into his two bank accounts domiciled in FCMB and STANBIC IBTC, between December 2019 and July 2020.

It said, “Investigations further revealed that the suspect succeeded in making his victims believe he was a military officer by photo-shopping military officers’ uniforms and superimposing the image of his face on them, and complementing the fraud by attaching his name tag on the uniforms.

“He was also discovered to have forged military documents, which he passed off to his victims as genuine in a bid to convince them that he would secure NDA admission for them.”

Curriculum Should Be Review To Reflect Education For Employability